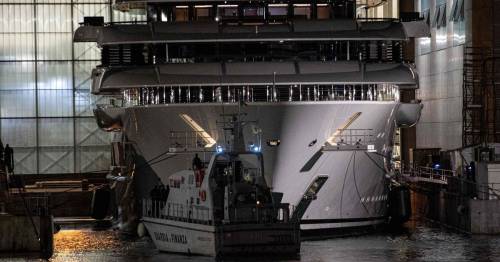 Italian authorities are poised to seize a luxury yacht rumoured to belong to Vladimir Putin.

The Scheherazade, which is worth more than £560 million, is docked at Marina di Carrara near Pisa and authorities in Italy have recommended that it be impounded as part of sanctions against Russia.

Italy's financial police have been investigating the yacht since the end of March but plans for its seizure were made public late on Friday night amid concerns that it was on the verge of sailing into international waters in a bid to escape sanctions.

The 450ft-long vessel, which includes spas, swimming pools and two helicopter pads, has been undergoing a refit since September.

The Scheherazade docked at the Tuscan port of Marina di Carrara, Tuscany
(

Authorities in Italy have not named the yacht's owner but said they have a "significant economic connection" to "senior elements" at the Kremlin.

Activists and investigative reporters associated with the detained Russian opposition leader, Alexei Navalny, are adamant that the yacht is owned by the Russian president.

They have information that indicates that all but one of the yacht's crew are members of the FSB or FSO – agencies that provide security for Putin and his associates.

Papers for the Scheherazade seen by Navalny's investigators say that its official owner is an offshore company from the Marshall Islands. Such methods are often employed by the mega-rich to hide their wealth.

Putin also has a history of rarely including his name on official documents, instead opting to list family or friends as owners.

The Italian Financial Police said: "After verification by the fiscal authorities it has come to light that there is a significant economic connection between the owner of The Scheherazade and senior elements of the Russian government.

"On the basis of these elements it has been recommended that the yacht be placed on the current European Union sanctions list and the Minister of Finance in Rome has agreed."