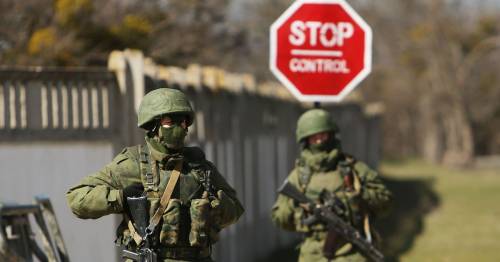 World War 3 fears are mounting across Europe with the continent closer to conflict than it has been at any time in the last 30 years, according to a Polish official.

Polish Foreign Minister Zbigniew Rau said there has been a risk of major military escalation in Eastern Europe for several weeks.

Tensions continue in Ukraine, Georgia, Armenia and Moldova, all countries with active or frozen conflicts.

Russia was alleged to be involved but was not mentioned in Mr Rau's speech at the launch of Poland's year-long chairmanship of the region's largest security organisation on Thursday.

During the event, he issued a dire warning to envoys from 57 members of the Organization for Security and Cooperation in Europe.

"It seems that the risk of war in the OSCE area is now greater than ever before in the last 30 years," Mr Rau said.

"For several weeks we have been faced with the prospect of a major military escalation in Eastern Europe."

Poland is among the NATO members which are most keen on confronting what it sees as Russia's revisionist ambitions in Eastern Europe.

"We should focus on a peaceful resolution of the conflict in and around Ukraine," Mr Rau added.

Russia has deployed more than 100,000 troops near its borders with Ukraine, which is already battling Moscow-backed separatists in its east.

It comes after Russia annexed Ukraine's Crimea region in 2014.

Ukrainian President Volodymyr Zelenskiy said on Tuesday that the country is prepared to take necessary action to end the war in its eastern Donbass region.

He said in a statement: "It is time to agree on an end to the conflict and we are ready for the necessary decisions during a new summit of the leaders of the four countries."

The president's chief of staff Andriy Yermak added that Kyiv wanted to agree on measures such as more prisoner swaps and implementing a ceasefire.

Efforts were also underway to help stop conflict in eastern Ukraine between Government forces and pro-Russian separatists, but progress stalled in November.

Ukrainian soldiers near the front line in Marinka, Ukraine, in December
(

Russia said it is not preparing for an invasion – but wants to see the West back off from its support for the Ukrainian Government.

It also asked for US-led NATO to guarantee it will not expand further east.

Talks in Vienna, Austria, will be the first this week in which Ukraine will be represented but they are only being undertaken at a low, ambassadorial level.

The Kremlin has made a bleak assessment of Russia's security talks with the US and NATO this week, describing them as "unsuccessful" with disagreement on fundamental issues.

Taiwan Foreign Minister Joseph Wu issued a startling warning of the emerging military crisis with China which could lead to war.

Previous : ‘End finally in sight for pandemic’ but WHO expert warns of ‘more bumps to come’ – World News
Next : Teacher Ashling Murphy, 23, murdered ‘by stranger’ while jogging along canal path – World News