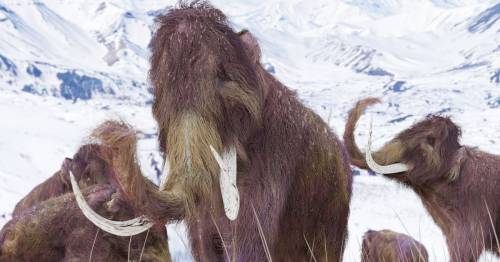 Woolly mammoths could be brought back from extinction in a bid to fight climate change in Siberia, a new project has claimed.

The prospect of recreating mammoths and bringing them back to the wild has been discussed for over a decade, but yesterday researchers announced the launch of a new company that could make the plan a reality.

Technology and software entrepreneur Ben Lamm and world-renowned geneticist Dr George Church founded Colossal – a project hoping to use genetic engineering to alter the genome of Asian elephants to turn them into modern-day "mammoths".

The extinction of the creatures, which could grow to some 11–12 feet tall and weigh up to six tonnes, has been linked to climate change.

Bringing them back could help restore their original habitat, scientists have claimed

Colossal has raised $15 million (£11 million) and the researchers now aim to create an elephant-mammoth hybrid by making embryos in the laboratory that carry mammoth DNA.

The project's goal is to recreate lost habitats by returning the extinct species that once lived there. In Siberia, this will include revitalising Arctic grasslands.

Mr Lamm said in a press release: "Never before has humanity been able to harness the power of this technology to rebuild ecosystems, heal our Earth and preserve its future through the repopulation of extinct animals.

"In addition to bringing back ancient extinct species like the woolly mammoth, we will be able to leverage our technologies to help preserve critically endangered species that are on the verge of extinction and restore animals where humankind had a hand in their demise."

Lyuba, the world's most complete mammoth, is seen before going on public display at Natural History Museum
(

Mammoths went extinct 10,000 years ago, but some isolated populations survived around the Bering Sea and Arctic Ocean until about 4,000 years ago.

Mr Lamm added: "Our goal isn’t just to bring back the mammoth, but to bring back interbreedable herds that are successfully rewilded back into the Arctic region."

Professor Church, 67, is known as the father of synthetic biology and works at Harvard Medical School.

In 2015, he and his team used the Crispr gene editing technology to splice frozen woolly mammoth genes into the DNA of skin cells from an Asian elephant.

A new project hopes to create an elephant-mammoth hybrid
(

He told The Guardian : "Our goal is to make a cold-resistant elephant, but it is going to look and behave like a mammoth.

"Not because we are trying to trick anybody, but because we want something that is functionally equivalent to the mammoth, that will enjoy its time at -40C, and do all the things that elephants and mammoths do, in particular knocking down trees."

To recreate an elephant–mammoth hybrid, scientists would need to sequence the genome of the woolly mammoth from a well-preserved, specimen.

They would then compare the ancient genome with that from modern Asian elephants to identify the genes that are responsible for mammoth hair, insulating fat layers and other cold climate adaptions.

The embryos would then be carried to term in a surrogate mother or in an artificial womb.

If all the steps go to plan as expected, researchers hope to have their first set of calves in six years.

Some experts, however, have expressed scepticism that creating elephant–mammoth hybrids is the best way to restore the Arctic habitat.

Victoria Herridge, an evolutionary biologist at the Natural History Museum, told The Guardian: "The idea that you could geoengineer the Arctic environment using a heard of mammoths isn’t plausible. The scale at which you’d have to do this experiment is enormous.

"You are talking about hundreds of thousands of mammoths which each take 22 months to gestate and 30 years to grow to maturity."

Gareth Phoenix, an ecologist working at the University of Sheffield, said a "multitude of different approaches" is needed to fight climate change.

He warned that introducing elephant–mammoth hybrids in the Arctic could bring "unexpected consequences" to the environment.

He added that removing trees and moss in the region could damage the environment as they are critical in protecting permafrost.

What do you think about this story? Have your say in the comments

Previous : Michael Schumacher ‘thought he was on his way upstairs’ after ‘heart stopping’ crash
Next : Trainee doctor, 23, ‘shot dead by fiancé weeks after he proposed on romantic holiday’ – World News