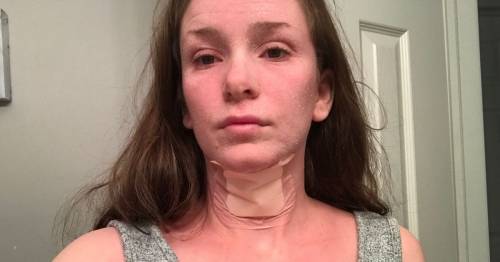 A woman felt like she’d be better off dead after topical steroid withdrawal caused her hair to fall out, quit her job and left her awake for five days.

Waitress Keri Campbell, 23, from Ontario, Canada, experienced eczema for nearly 15 years, and felt like it was becoming worse.

Yet the steroid creams prescribed by her doctors only aggravated her skin condition.

She used to slather her body with hydrocortisone and betaderm steroid creams, but when the creams weren't helping she forced herself to heal naturally.

Yet after stumbling upon a social media post describing what she thought was eczema, but was in fact topical steroid withdrawal – she realised she needed to take a drastic U-turn to save her skin.

Keri is now on a mission to increase awareness of TSW, and how easy it is for your skin to get addicted to creams, without you even being aware.

Keri said: "I have suffered with eczema since I was about eight years old. Right away I was prescribed with a steroid cream by my family doctor.

Waitress Keri Campbell (23), from Ontario, Canada, had suffered from eczema for almost 15 years and believed it was becoming more severe
(

“She told me to apply it twice a day every time I had a flare up of dry or flaky skin and use it until the troubled spot is gone.

“Well over the years, somehow my eczema spread to my whole body – there wasn't a patch of clear skin in sight. I'm now almost twenty-three years old and I decided to research ‘why if I had been using steroid creams prescribed to treat my condition was it getting worse?’

“I stopped using my steroid cream because it just ran out and it was getting expensive, so I didn’t buy any, so my skin was getting worse and worse and nothing natural was working.

“One day I came across an Instagram page where this woman around my age looked exactly like me, yet she wasn't calling her condition ‘eczema’, she was calling it ‘red skin syndrome’ caused by topical steroid addiction.

“It hit me that this was why I was getting worse and worse. with about fourteen years of almost constant topical steroid use, I had completely thinned out my skin and caused an even worse condition than eczema.

“It was obvious then that I had to throw out all the steroid creams I had been using, and then it happened – the topical steroid withdrawal.”

Regular use of topical steroids – which are also called corticosteroids – can cause red skin syndrome, which can impact anyone who uses skin products.

Yet according to the US National Eczema Association, TSW primarily affects the faces of women who have been using high potency corticosteroids daily for more than 12 months.

Keri had been using these for 168 months – over 14 years – until she stopped on February 18th 2019. Little did she know what hell was to come next.

After years of steroid cream overuse, Keri abstaining from the creams caused her months of grueling pain
(

“The withdrawal of topical steroids was an absolute nightmare to deal with,” Keri said.

“My symptoms included: severe nerve damage and pain, extreme hair loss, oozing, itching until I bled, infections on top of infections, depression, body temperature issues with cold sweats constantly, losing the ability to move more than half of my body, and many more I can’t even remember.

“I had insomnia so bad that I would go four to five days without sleeping one minute.

“I tried everything to try and speed up and help me through this withdrawal from celery juice cleanse, going on immunosuppressants, trying a no moisture therapy, but nothing really helped, and if it did it was short lived until it got worse again.”

By March she had to quit her job for a total of four months. She also had to drop out of nursing school because she couldn’t take care of herself, let alone patients.

“I’m a server so I see many people all throughout the night but just the amount of stares I got made it so uncomfortable to do my job and I was on a bunch of painkillers just to get through the day," Keri recalled.

Keri pictured in 2017, before she realised that her skin cream was causing her extreme irritation
(

“The pain was so bad I couldn’t walk on my own and I could hardly get out of bed and I constantly needed assistance.

“I knew it wasn’t going to go on forever but I didn’t know when it was going to end so I was just thinking its better if I just end it now I don’t wanna live another day looking like this, feeling like this, being basically useless.

“There was a serious time where I considered it and I even attempted it but my life was saved and I was grateful for it.”

Keri thought she would never look like her old self again, but she ended 2019 the happiest she had ever been with her skin in years.

“Here I am one year after I stopped using topical steroid creams to treat what I thought was eczema, and I can happily say I’m eighty per cent healed,” Keri said.

“The only thing that truly cures topical steroid addicted skin is time. Every warrior of this condition will have different healing experiences, yet we are all so similar as well.

“I think about how sad it is that doctors will not talk to or warn anyone about the dangers of over-using steroids, because it can be a great aid for inflammation short-term, but it is not a cure nor should it be a permanent solution to treat skin conditions because it truthfully makes it worse.

“Steroid skin creams are in the list of the top five most expensive medications where doctors make their money and I do feel like the medical field is a business – if they were telling patients eczema could be cured naturally like I eventually did – they wouldn’t be making money off it.”

“I am happy I have made it here because there were many nights where I was in so much pain and living a life from my bed where I couldn't move in my own skin without assistance.

“I thought it would just be easier if I wasn’t here anymore, but life is so much better than it ever was. I no longer have to think about my skin as something that is holding me back, and now I don't even have the ‘eczema’ that I originally had when I was eight.

“It is so hard, and it is so difficult, but it is so worth it in the end. I have never felt better and looked forward to my health. I can control my health now.

“Your doctor may not always believe you, but If you have a gut feeling about your health, you just need to go for it 100%.

“Life gets better! I hope everyone can hang on because there is light at the end of this tunnel.”

You can find Keri documenting her topical steroid withdrawal journey on her Instagram @kerisredskin .