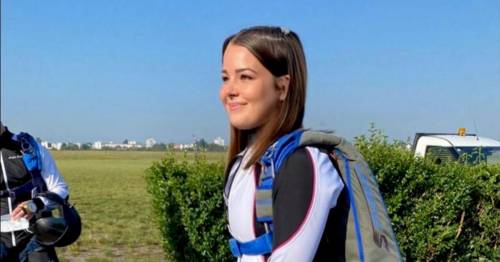 Woman plunges 3,300ft to her death as parachute failed to open during doomed skydive – World News

A young woman has died after her parachute failed to open while skydiving in France, causing her to plunge to the ground 3,300 feet below.

Romane Hourcastagnou, 23, who comes from the French city of Strasbourg, was an experienced parachutist with over 100 jumps under her belt.

She was skydiving near her home in Strasbourg with a group of 10 people, all experienced parachutists when tragedy struck.

According to local reports, Hourcastagnou jumped from the plane at a height of 1,000 metres (3,281 feet) but her parachute failed to open for unknown reasons.

Witnesses said she tried to carry out an emergency manoeuvre, but was unable to due to the height and speed of her fall, and she hit the ground in seconds.

Romane Hourcastagnou died after falling from a height of 1,000 meters while jumping from a plane with a parachute
(

Other parachutists tried to help the victim but to no avail. She reportedly died on the spot.

One eyewitness told local media: "We watched the accident with total helplessness. After her parachute did not open, the impact with the ground was very violent."

The emergency services were called to the scene, but could only confirm the young woman's death and her body was transferred to a local morgue.

The 23-year-old woman has been practicing the sport for a couple of years and had completed over 100 jumps, according to Roland Ilyes of the Alsace Skydiving School in Strasbourg.

Meanwhile, the local authorities have confirmed that they have opened an investigation into the young woman's death.

Last year, The Mirror reported on a parachuting instructor for the RAF who died during a training jump after her parachute failed.

An investigation was launched into the accident which happened on Friday at RAF Weston-on-the-Green, Oxfordshire.

The servicewoman's name, age and rank have not yet been released.

A Ministry of Defence spokesman said: "We can confirm that a Service Person has died at RAF Weston on the Green.

"Our thoughts are with the family, friends and colleagues at this time."

Previous : Russia has lost one third of ground force and is ‘significantly behind schedule’ – World News
Next : Zara Tindall has uncle Prince Charles to thank for her unique royal name