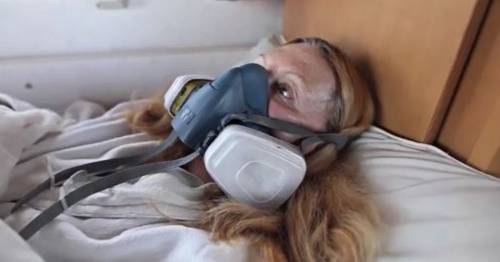 A woman says she's forced to wear gas mask every night due to a dispute over her neighbour's coal fire.

Brian Cohen from Westport, New Zealand, has threatened his neighbour after saying he would not stop burning coal.

He and his Ukrainian-born wife Svetlana moved to South Island in November.

But their neighbour began burning coal prompting a dispute over coal fumes.

Svetlana said: "We texted our neighbour to say we didn't want to cause an issue but asked if he could stop burning coal, but he's decided he's not going to stop, so we have this situation where my wife has to sleep in a gas mask every time he lights the fire and there's a westerly wind.

"I was really upset, I actually threatened to go over and smash his head in because it's made me really angry."

He received a warning from police after threatening his neighbour.

Svetlana compared the smoky atmosphere to "a gas chamber", and added: "Every night I need to wear a gas mask because I can't sleep, I can't breathe."

The symptoms prompted by coal smoke include coughs, chest pains and breathlessness.

Brian has threatened his neighbour over coal use
(

He has contacted the authority Buller District Council, but they could not help.

Figures show some 34.3% of homes on heat their properties using cheaper coal, compared to 1.3% nationwide.

The Ministry of the Environment in New Zealand says in addition to traffic emissions, wood and coal burning is among the greatest polluters.

Westport is part of New Zealand's industry, which is still dominant in the region.

Brian and Svetland Cohen outside their caravan
(

Some of the Cohen's neighbours have even laughed and told them they should have done their research before moving to Westport, suggesting they go back where they came from.

Buller mayor Jamie Cleine told Stuff.co.nz he had not received any similar complaints but sympathised with their plight.

"I would be loath to see any options taken off people's right to heat their homes," he said.

Svetlana Cohen suffers from breathing issues because of the coal fumes
(

"I don't see home heating, be that coal or wood, being high on the pecking order in terms of impact on climate change."

The couple complained to West Coast Regional Council said tio could vbe considered a nuisance under the Health Act 1956, this they said was the district council's remit.

Brian Cohen from Westport, New Zealand was warned by police
(

An officer dealing with compliance said a medical health officer had advised laws were ineffective in dealing with smoke complaints as they were old legislation.

It said the authority is aware of several attempts to use this legislation which have been unsuccessful.

Previous : UK polio outbreak: Parents warned to make sure kids up to date on crucial vaccinations
Next : Prince William says racism remains ‘all too familiar’ for Black people in Britain today