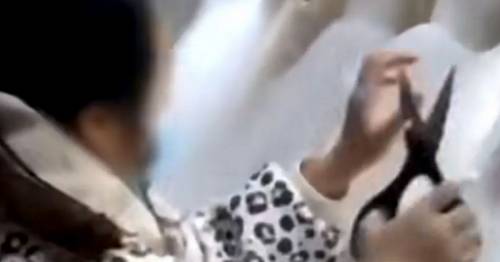 A woman cut up 32 wedding dresses at a bridal salon after an argument over a deposit.

She began used scissors to slice up after a dispute with the store and was videoed shredding the dresses as she went through racks of the gowns.

The woman, who has not been named, took the drastic action because she wanted her £400 deposit back.

Chinese site Sohu reported the damage happened in a shop in Chongqing's Jiangjin district on January 9.

The 32 dresses are said to be worth £10,000 and the row happened after it refused to return the cash after the customer suddenly cancelled a £900 wedding package

She goes through rails and rails of the dream dresses and proceeds to cut almost every dress in the clothing rack.

The woman begins her trail of destruction
(

And the footage quickly went viral as the video became popular on social media sites.

The person filming her explains the value of each dress and says they cost thousands of Chinese yuan.

"Think clearly. These dresses cost several thousands of yuan," they are overheard saying.

"Thousands? Even if it's several ten-thousands, that's fine," the woman replies, continuing to snip at the gowns with the scissors. "Call the police."

Rails of the garments were cut up
(

"This one? It's several tens of thousands," the customer is warned as she goes to work with the scissors on a traditional red and gold dress estimated to cost more than £1,000

The shop refused to refund her the money because of their policy of not refunding advanced payments.

The woman insisted she would be happy to pay the cash for the dresses which are a luxury in the Chinese republic.
The damage she inflicted on the garments would have cost a huge amount in Chinese wages.

But the store did apparently offer to provide some arrangements for a child’s 100th-day celebration as the customer was reported to be expecting a baby, according to Weibo.