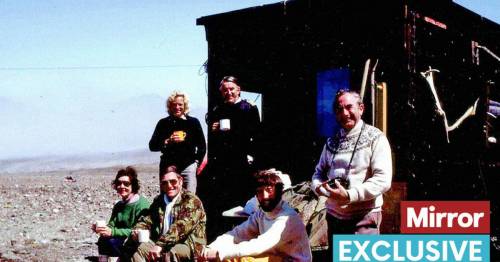 They had journeyed to the furthest reaches of the South Atlantic to make a film about wildlife.

But when Argentinian forces landed on South Georgia island in April 1982, as part of the Falklands invasion, Annie Price and Cindy Buxton became accidental spies.

Holed up in a hut the size of a garden shed, the women spent four weeks sending coded messages to the British naval ship which would eventually come to their rescue.

As the Falklands War raged, HMS Endurance was hiding its position from enemy troops, so Annie and Cindy sent secret messages via radio.

In a show of incredible bravery, the pair refused to stop shooting their documentary after the invasion. It was later shown in ITV ’s long-running series Survival.

They often paused filming to alert Endurance when they spotted an Argentinian Hercules plane overhead – even though they knew the Navy ice patrol vessel could not respond.

Cindy and Annie were making a wildlife film at the time
(

Annie, now 73, said: “We played spies. If there was a big Hercules flying over, we used to say, ‘An enormous great albatross has just flown over’.

“When we needed to speak to Endurance we’d say, ‘Just eaten an enormous red plum’. That was our nickname for Endurance because she was red.

“We were keeping watch all the time while still filming. It’s proof that women

are stronger than people think we are. We thought, ‘What do we do? We have to carry on.’”

The pair, then in their early 30s, were told they could be captured by Argentinians at any moment. They were also advised not to fly the Union Jack – a warning they “took no notice of”.

The duo sold the nature programme to ITV
(

Annie, from Port Isaac, Cornwall, said: “It was frightening because we never knew when we’d be collected by the Argentinians in the middle of the night. Every time we heard an animal or British scientists working nearby, we thought the worst.

“We had our basic rucksack ready to go if they were going to get us, but we really had to be so careful because they were monitoring our every move.”

The pair had arrived on South Georgia in October 1981 against the backdrop of increasing tension between Britain and Argentina over the Falklands.

The territory is known in Spanish as Las Islas Malvinas and many Argentinians believe it is rightfully theirs.

In December 1981, military dictator General Leopoldo Galtieri came to power, desperate to mobilise patriotic feeling around the territory to distract from the country’s economic woes.

Just months earlier, the British government had announced plans to decommission Endurance – which some believe persuaded Argentina that an invasion would succeed.

Brits stationed in the remote territory were always delighted to see the ship delivering supplies.

Annie said: “Endurance was bright red and whenever we saw her, we’d scream our heads off with excitement. Sometimes she’d bring us mail, sometimes the governor of the Falklands and his wife were on board. Cindy’s parents came to visit us in our tiny hut.

“The hut was eight feet by 12 feet, the same size as someone’s garden shed.

“The loo was outside and on a frequent basis we would have blizzards, and the loo paper would fly down the beach.

“There was no running water to start with until it started to melt a bit.

The researchers wrote a novel about their experience
(

“Wash day was once a week and it took a whole day to wash our bodies, hair and clothes.

“All the water had to be boiled and we had to do it outside because there was no room in the hut. It was small but tidy and organised.”

Annie, who was stationed in a remote settlement called Grytviken, says she and Cindy, now 71, were told in late March that war was edging closer.

She said: “Endurance arrived and dropped a note with a Mars bar each saying, ‘Problem occurring with Argentinians at Grytviken’.

“One ship was noted to be very near South Georgia.

“Cindy had brought a radio and transmitter with her, and we were told to keep it on channel 13.

Endurance dropped a note to the women with a Mars Bar
(

“This was a channel that transmitted from the base camp to all the British bases and huts around the island. We were in constant contact with everyone else. Argentinian troops had been found saying they had come to dismantle the whaling station.

“They put up the Argentinian flag and were all in uniform.

“Everyone was nervous and things got worse after that.”

Argentinian troops landed in the Falklands on April 2, 1982, and arrived in South Georgia the following day.

It heralded the start of a bloody 10-week conflict which would claim almost 1,000 lives, including 255 British service personnel.

Endurance had dropped Royal Marines on South Georgia and, together with civilians, they tried to fight the Argentinian forces.

But, outnumbered 300 to one, they had no choice but to surrender. Meanwhile, plans to rescue Annie and Cindy were thwarted when the Ministry of Defence ruled them too dangerous. Annie said: “We were left stranded. But on April 21, Cindy and I were keeping a lookout.

“There were winds of around 70mph. We both had our binoculars and said ‘I can see red!’

“Then, there was the howl of ­Endurance and we just screamed and thought there must be a retake about to happen.”

South Georgia was officially reclaimed by British forces on April 25 but it would be another five days before Endurance swept the women to safety.

Annie said: “We were picked up and spent the night on board.

“We soon after picked up others from field parties. It was such fun, having spoken to each other on the radio for so long.”

The pair were eventually transferred to a ship called HMS Antelope –where they batted off suggestions that it was bad luck to have women aboard a ship.

Annie said: “We had such fun, playing football, tennis, cricket on the deck. The ball was on the end of a string so it couldn’t go over the side.

“Someone said, ‘Women are very bad luck on a ship’. We said, ‘We won’t bring you bad luck, we’ll bring you good luck.’

“When we left, he said, ‘Good luck Annie and I’ll see you back in England.’ We waved everyone off and then 10 days later she was blown up.”

Annie and Cindy were taken to Ascension Island, and flown back to the UK. The Falklands War ended on June 14, when Argentina surrendered, having lost 649 soldiers.

But Annie, who is a poppy appeal organiser, is determined the horrors of the Falklands should always be remembered. She said: “I’m honoured to be involved in the commemorations with the Royal British Legion.

Cindy was eventually flown back to the UK
(

“They call it the forgotten war, but so many were killed and so many injured. You do not let another country walk into a British island and take it over.

“The Falkland Islands are more British than the British.

“They’ve all got Union Jacks up on their windows. They had a right to be stood up for.”