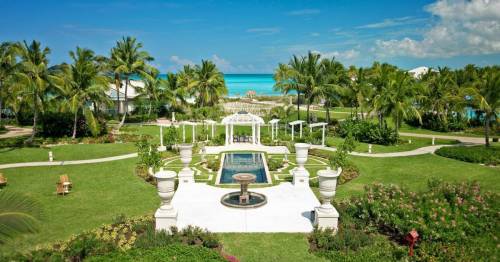 A wife woke up unable to move and found her husband dead at a Sandals resort in the Bahamas – where the couple were celebrating their anniversary.

Local officials have confirmed that three US citizens died on Friday while staying at Sandals Emerald Bay on the Caribbean island – with a fourth surviving victim airlifted to Princess Margaret Hospital in the capital, Nassau.

One of the victims has been identified as Vincent Chiarella, a resident of Birmingham, Alabama.

His wife Donnis was injured and taken by helicopter to hospital during the couple's anniversary holiday, their son Austin told ABCNews.

He told the US broadcaster his mum was unable to move because her limbs had swelled up when she awoke to the horrific sight of her husband "laying on the floor".

He said: “Her legs and arms was swollen and she couldn’t move and she screamed to get someone to come in the door."

The son of a man who died, and a woman who is now in hospital, said his mum couldn't move when she woke up
(

Cops say they found a man "slumped against a bathroom wall" close to a screaming woman in a villa at the luxury beach resort.

The Royal Bahamas Police Force said they do not suspect foul play and that there was no evidence of trauma on any of the victims.

The three fatal victims – two men and one woman – were found in two separate villas.

A guest at the resort, Chris Coucheron-Aamot, shared a theory on Facebook about the resort's air-conditioning being responsible
(

"The officers found a Caucasian male slumped against a wall in a bathroom, unresponsive," investigators said .

They added: "The woman was also unresponsive. Both individuals showed signs of convulsion. The officers examined the bodies and found no signs of trauma."

The night before the Chiarellas were found, they had complained about feeling unwell and were treated at a local medical facility before returning to their villa.

The investigation into the tragedy remains ongoing and no cause of death has yet been given until autopsy results have been completed.

The couple had complained of feeling unwell the previous night

However a guest at the resort has offered a theory about what may have caused the three deaths.

"Three of our neighbours in the building right next to us died and a fourth was airlifted in critical condition early yesterday," Chris Coucheron-Aamot posted on Facebook on Saturday.

"There was crime scene tape and security guards all around our unit.

"It sounds like it may have been a fault with the a/c in the unit, causing a toxic coolant leak."

Chester Cooper said: "I am advised that foul play is not suspected"

“We offer our thoughts and prayers to the families affected.”

A statement from Sandals resort was released confirming the deaths.

It read: “We are actively working to support both the investigation and the guests’ families in every way possible during this difficult time.

"Out of respect for the privacy of our guests, we cannot disclose further information at this time."

Sandals Emerald Bay is among a dozen all-inclusive locations in the Atlantic and Caribbean.

The resort charges thousands for a multi-night stay, while some suites offer butler services, beach access and private patios for guests.

The Sandals resort has three swimming pools, 11 restaurants and a golf course among its facilities.