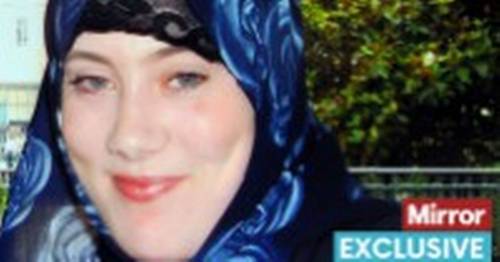 British terrorist Samantha Lewthwaite has split from her fourth husband, according to Somali security sources.

The mum of four is said to have fled to a mountain hideaway following her break-up with a ruthless warlord in Somalia after seven years of marriage.

Nicknamed the White Widow, she is wanted for a series of terror attacks across Africa and is believed to have been responsible for the deaths of more than 400 people.

Lewthwaite, of Aylesbury, Bucks – whose first husband was a 7/7 Tube bomber – is thought to have escaped to war-torn Yemen in a boat after the split from Hassan Maalim Ibrahim put her life in danger.

Lewthwaite (centre) is believed to have escaped to Yemen

The daughter of a British soldier and born in Northern Ireland, she has now disguised her blue eyes and wears a full niqab veil and gloves to hide her skin.

“She and Sheikh Hassan are no longer together – it is thought they are divorced,” a security source said.

“She had protection from his family in a no-go area in Somalia.

“But now she is not welcome and has gone back to al-Qaeda-controlled Yemen. She got there in a dhow sailing vessel.

She branded the July attacks that killed 52 people “abhorrent” but later fled the UK with her children, surfacing in Africa in 2009.

She was put on Interpol’s red list after a 2013 shopping centre attack in Nairobi, Kenya, that killed 67 shoppers, including five Britons. But she escaped to Somalia and became a key figure in extreme Islamic group al-Shabaab.

Security services believe other ­atrocities linked to Lewthwaite include an attack on Euro 2012 fans in a Mombasa bar which killed three, and the slaughter of 148 people by gunmen at a university in Kenya in 2015.

She is also said to be training her children to be terrorists. Her second husband and father of her third child was British bomber-maker Habib Ghani, who was killed in a gun battle in Somalia in 2013.

The third was former Kenyan naval officer turned terrorist Abdi Wahid, believed to be behind a Nairobi market bombing in 2014 which killed 10. It is not known if Wahid is dead or alive.