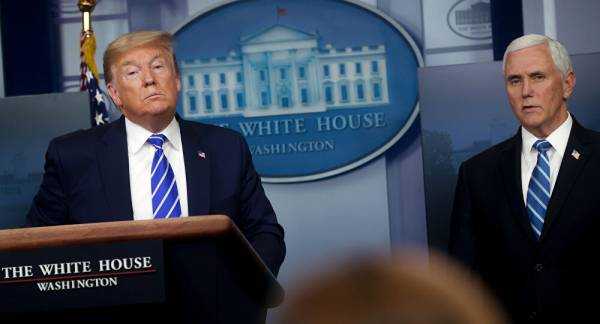 The president named Mike Pence as chair of his White House Coronavirus Task Force in late February, with the vice president regularly appearing at President Trump’s side for daily press briefings and faithfully defending his policies, and speaking to him two to three times a day on the federal response.

President Donald Trump and Vice President Mike Pence are two very different men, in terms of personalities, their experience, and in some cases even their political views. But the pair have grown to appreciate one another more than ever thanks to the coronavirus pandemic, White House insiders have told CNN.

Once source told the network that before the pandemic, Trump would wonder aloud on why he even needed a vice president. Now, the source said, the president has shifted to lavishing Pence with praise over his work in the administration’s response to coronavirus.

Several unnamed sources told the network that the coronavirus partnership worked so well that it has effectively squashed earlier rumours that Trump was considering replacing Pence as his VP pick for 2020.

Insiders also believe that Pence’s public praise for Trump is not an act, and that he acts the same way in private as well, always remaining “very formal with the president,” and speaking only when called upon.

Indeed, in recent weeks, Pence has not only defended the president’s decision-making and personal leadership, from the decision to cancel World Health Organization funding to Trump’s latest claims about coronavirus possibly escaping from a Wuhan biolab (a claim Beijing has vigorously denied), but even the president’s controversial tweeting about the need to “liberate” states run by Democratic governors where shelter in place orders are in effect. In March, Pence even went so far as to defend Donald Trump’s Jr’s remarks suggesting that Democrats wanted to “kill millions of people” to bring Trump down, suggesting that “the other side” (i.e. the Democrats) should “turn down the volume” and that Trump Jr was merely “pushing back” against the politicization of the outbreak.

Pence took control of the White House coronavirus task force, formed in late January, on February 26, and is said to have been speaking with the President two to three times a day amid the crisis. And despite the president’s occasional public bouts with Democratic governors, Pence, a former governor himself, has taken up the job of serving as the main liaison between state leaders and the White House, earning praise from both the president and governors themselves. Trump, one source said, recently remarked that Pence “speaks their language.”

The Trump administration has taken flak for its COVID-19 response effort, with opponents accusing the federal government of being slow to respond and unable to meet medical and testing needs in a timely matter. The United States presently has the highest number of novel coronavirus cases, with its 1.18 million infections representing nearly a third of the global total. Nearly 69,000 Americans are said to have succumbed to coronavirus-related complications, according to Johns Hopkins figures.