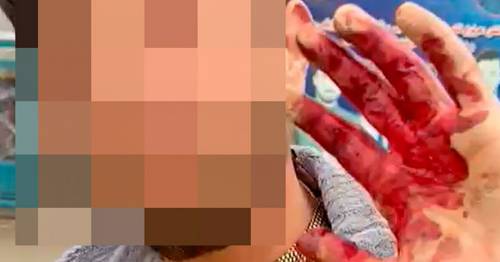 A British dad stuck in Afghanistan is being forced to choose between abandoning his children or remaining in mortal danger.

The Bradford father, who we are not naming for security reasons, was left bleeding and terrified after a horror knife attack during an attempted kidnapping in Kabul this month.

He claims thugs set upon him because of his UK citizenship and he’s now in fear for his life, hiding along with his wife and two young children.

Despite the whole family being included on an evacuation list in August, the dad has since been told that he alone is eligible for evacuation.

His wife and two children are Afghans, though his children may be entitled to British citizenship.

Speaking of the UK Government, the father says: “They don’t care about us. How can they do this to their own citizens?

“They are supposed to help their citizens, not leave them to their deaths.”

Since the Taliban came to power, Brits remaining in Afghanistan face extreme danger.

This was something the Bradford father found out when he was attacked in Kabul earlier this month.

He says: “I was going to the pharmacy to get insulin because I am diabetic.“

"On the way back from the pharmacy, a car stopped and three people came out.

“They grabbed my hand. They had weapons with them and their faces were covered.

“They had knives. They were kidnapping me. I don’t know who they were because I couldn’t recognise them.

“They had the same dress as the Taliban.

“It wasn’t a random attack. It was organised because I am British.”

He’s now unable to even go outside for fear of further violence.

The victim was born in Afghanistan but moved to the UK as a teenager in the mid-2000s with his family – he has since become a British citizen.

In 2014 he married an Afghan woman, with whom he has a four-year-old daughter and a 10-month-old son.

But his wife hasn’t been able to get a UK visa, leaving her and their two children to live in Afghanistan.

As the Taliban swept across the country in August following the sudden withdrawal of US troops, the dad began to fear for his family’s safety, and decided to travel to Afghanistan to look after them.

He says: “They were ringing every single day crying.

“All I could hear in the background were bombs blasting and other weapons like rocket launchers.

“I came back because of the safety of my children.

“I didn’t know I was going to be stuck there or hated like this.

“British citizens and their families’ lives are in danger in Afghanistan.”

His wife and kids were plunged into even greater peril when the relative they had been living with was killed over ties to the former government of Afghanistan.

Heartbreakingly, the family were scheduled on an evacuation flight in August, but were turned away moments before they were due to board the plane.

Left to fend for themselves, they now face extreme danger.

The father has been attacked in “multiple incidents” and even had his driving licence taken off him because it has a British flag on it.

And he thinks locals, who recognise him from visits to the country when he was living in the UK, know of his British citizenship – leading to the recent knife assault.

He says: “When I came home my injury was covered – I’d wrapped it up with white cloth.

“They saw the blood on my clothes. My 10-month-old baby was crying. My daughter was crying.

“My missus was crying and saying in her language: ‘They will come home and they’re going to kill all four of us.’

“She was shaking. I’m trying my best but I don’t know what to do.”

During Operation Pitting, the British military operation to evacuate UK citizens and eligible Afghans, over 15,000 people were evacuated from Afghanistan as the Taliban came to power.

It’s unclear how many UK nationals remain trapped in the country.

Imran Hussain, the Labour MP for Bradford East, has been attempting to help the attacked father, who is his constituent, for months.

Hussain says: “I’ve been dealing with this case since the fall of Kabul in August, and I’ve raised it repeatedly at the highest levels of Government, including with the Prime Minister in Parliament, as well as with the Foreign Secretary, the Home Secretary and the Defence Secretary.

“However, no Minister has provided me with any real, meaningful response, even as my constituent’s life and the life of his family are in danger.

“Despite being a British national, the Government have abandoned him in Afghanistan and placed his young wife and children in harm’s way by ejecting them from Kabul Airport into dangerous streets where a horrific suicide attack took place just hours before.

“If this was not bad enough, they now refuse to allow his family to join him on flights out of the country, forcing him to choose between taking a flight and deserting his family, or remaining in Afghanistan.

“Given the very real danger that my constituent and his family are now in, with threats against his life and the life of his family, the Government and the Foreign Secretary must treat this case seriously, and urgently work to ensure that he is allowed safe passage back to the UK or to a third country alongside his family, before it is too late.”

It's unclear how many more cases like the Bradford father's are still ongoing since August.

Crowds of Afghans at Kabul airport on August 16, 2021, desperately trying to flee as the Taliban took control of Afghanistan after President Ashraf Ghani fled the country
(

Fahim Zazai, founder of the Afghan Community and Welfare Centre in Walsall, West Mids., is providing support to Afghan refugees who have made it to the UK.

His charity is directly contacting around 15 British nationals still unable to leave Afghanistan – but he suspects there may be "several hundred" more UK nationals and their dependents still inside the country.

"It's been three months now. Legally, they are obliged to protect British passport holders.

"Legally they have to rescue them or keep in touch with at least if they are not able to do anything."

A Foreign, Commonwealth & Development Office spokesperson said: “The UK has supported nearly 1,800 to leave Afghanistan since the end of Operation Pitting.

“This includes over 700 British nationals and eligible dependants.

"We are doing all we can to enable remaining British nationals and their eligible family members to leave Afghanistan including working closely with our partners in the region to keep as many routes out of Afghanistan open as possible.

“We are in contact with British nationals and others we are trying to help.”