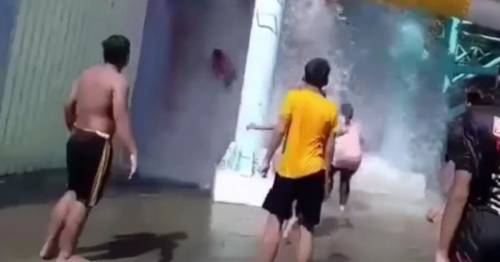 Astonishing footage was captured on video and showed kids at an amusement park in Indonesia fall to the hard ground below.

Sixteen people were taken to hospital after suffering injuries following the terrifying ordeal.

The incident happened at Kenjeran Park, known as Kenpark, in the city of Surabaya in the Indonesian province of East Java on Saturday.

According to local reports, a section of the water slide collapsed and riders plummeted from a height of around 10 metres to the hard ground below.

The water slide came apart causing people to fall, at the Kenpark Waterpark in Surabaya, Indonesia
(

Sixteen people were injured after the slide collapsed
(

Local media said the injured people were treated in hospital.

Video footage of the collapse captures the moment children fell to the ground.

In the first video, the section of the water slide is seen collapsing as water cascades onto the ground followed by the sickening thud of people plummeting to the tarmac.

Onlookers screamed in shock as park visitors rush to help the victims.

The second video shows at least one shocked rider sitting on the ground as the collapsed section of the chute is seen lying at the base of the ride.

According to reports, the collapse occurred because the ride had worn out and weakened over time.

But the park's management said it happened because it was overloaded and said maintenance was carried out on the slide about nine months ago.

The deputy mayor of Surabaya, Armuji, called for the immediate inspection of other amusement parks in the region to prevent similar accidents from taking place in the future.

He also reminded the owners of amusement parks to take responsibility and follow necessary safety measures to protect the well-being of their visitors.

The water park was closed after the incident and the police investigation into the cause of the slide collapse is ongoing.

Earlier this month The Mirror told how 911 calls showed panic and confusion after teenager Tyre Sampson, 14, fell to his death from an Orlando fairground ride.

The teen appeared to slip out of his seat on the Orlando FreeFall ride at ICON Park, on March 24, according to reports, with photos and 911 calls suggesting his safety harness was not properly secured.

The 14-year-old is also said to have known something was wrong with his harness and asked a friend sitting next to him to tell his parents he loved them.

And now four 911 calls have been released as part of an Orange County Sheriff’s Office incident report that gives a disturbing indication of the panic at the fairground after Tyre fell.