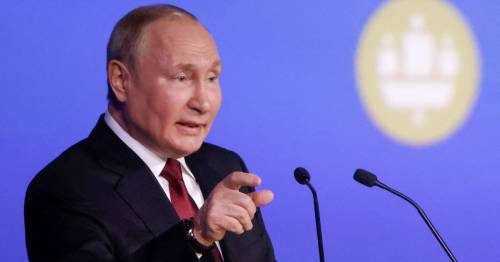 "Frightening" food shortages caused by Russia's blockade of Ukraine's port city of Odesa could lead to the break down of law and order in dozens of countries unless Vladimir Putin is stopped.

The official fears countries feeding their citizens on wheat exports from Ukraine and Russia will be hardest hit.

Some of these nations are the world's poorest, including Somalia, Benin, Laos, Egypt and Sudan.

Mr Beasley said: "Even before the Ukraine crisis, we were facing an unprecedented global food crisis because of Covid and fuel price increases.

Vladimir Putin delivers a speech during a session of the St. Petersburg International Economic Forum on Friday
(

“Then, we thought it couldn’t get any worse, but this war has been devastating.”

He said now the current climate is a "very, very frightening time".

"“We are facing hell on earth if we do not respond immediately," he added.

"The best thing we can do right now is end that damn war in Russia and Ukraine and get the port open.”

Issues have been brewing for over a decade, but have been made sharper by the invasion, Mr Beasley said.

If not addressed, the shortages could lead to "famine, destabilisation of nations and mass migration" in some of the world's poorest nations, he added.

Civil unrest has already been sparked in a number of countries, including Sri Lanka (protest in Colombo pictured on June 18)
(

The rise in shipping, fertiliser and fuel costs – caused by a deadly triple threat cocktail of Covid-19, climate change and the war – has lead to a spike in the number of people suffering "chronic hunger".

In just five years, people experiencing chronic hunger has shot up from 650million to 810million.

He described it as "marching towards starvation and you don't know where your next meal is coming from".

To alleviate the suffering, Mr Beasley called on the world's elite to spend more on global hunger, and urged Russia's tyrant dictator to open up the port of Odesa.

Somalia is one country relying wholly on Ukrainian wheat exports to feed its 15.89million people.

Other countries, like Egypt, rely on Ukraine for the vast majority (80 per cent) of their wheat imports.

The blockade of Odesa and Ukraine's Blas Sea ports has lead to over 20million tonnes of grain that would usually feed the world becoming trapped.

Earlier this month, Putin hit out at the UK, blaming the country for the global food crisis.

The Kremlin boss said sanctions placed by Britain and the USA on Russian fertilisers were the cause of global food supply issues – despite the fact such sanctions do not exist.

Ukrainian citizens try to live normally despite the continuous bombing
(

The former KGB agent turned despot said: "The situation will worsen, because the British and Americans have imposed sanctions on our fertilisers.”

Putin went on to say that the best solution was to ship grain through Belarus, which would conveniently mean any sanctions on that country must be lifted.

He called reports of a Russian export ban a “bluff” in an interview with Russian national television.

His army has seized much of Ukraine’s south coast and its warship control access to the Black Sea ports.

"If someone wants to solve the problem of exporting Ukrainian grain – please, the easiest way is through Belarus. No one is stopping it," Putin said.