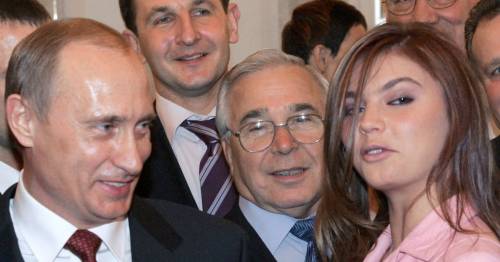 Vladimir Putin 's rumoured lover is celebrating her 39th birthday as the Kremlin leader flew to Sochi this week – where she is believed to live.

Alina Kabaeva 's birthday celebrations come as it has been rumoured to have fallen pregnant with Putin being the father.

The Russian President, 69, is believed to have fathered at least two sons with the former Olympic rhythmic gymnast.

It is unclear what Kabaeva will be doing today for her birthday, but this week Putin flew went to the Black Sea resort Sochi – where Kabaeva is said to be living.

Yesterday, Putin toured the elite Sirius education centre in Sochi which was established the same year the first son was allegedly born.

A recent report in a Swiss newspaper said a doctor from the country had delivered two Putin sons to Kabaeva, one in 2015 in Switzerland, and the second in Moscow in 2019.

At the start of the invasion, it was rumoured that Kabaeva was hiding either in Switzerland or in a hi-tech nuclear bunker in Siberia.

But she was seen last month in Moscow posing in front of the ‘Z’ insignia of Putin’s war in Ukraine.

Rumours first linked Kabaeva romantically to Putin as long ago as 2008 when she was a pro-Kremlin MP.

There have been many reports of her wearing a wedding ring, but no records of marriage.

It comes as the gymnast's former boyfriend faces jail after he is accused of sabotaging security at four strategic Arctic ports in a “bribe-taking scandal”.

Colonel Shalva Museliana has fled abroad and has yet to be located in his foreign hideaway as he faces being extradited to Moscow by Putin’s criminal investigators.

Putin is said to be in Sochi – where Kabaeva is living
(

He dated Kabaeva in the early 2000s and after they split they vowed to "stay friends".

Her ex Museliana’s alleged crimes came when he served as a colonel in charge of “anti-criminal security measures” in the Russian national guard, a force that reports directly to Putin.

He and other defendants are accused of bribe-taking in the supply of snowmobiles, all-terrain vehicles, and speedboats to the guard’s Arctic forces.

A probe by the Russian Investigative Committee – headed by a former Putin university classmate – concluded “that Colonel Shalva Museliani was the one who organised theft of state funds”, reported Kommersant newspaper.

The equipment was to protect the ports of Provedeniya, Tiksi, Pevek and Sabetta and was purchased after a “bribe” from the suppliers.

It was not fit for purpose, it is alleged.

The criminal group “was distinguished by a clear distribution of roles, impeccable discipline, and the ability to conspire”.

The accusations against Kabaeva’s ex-lover and four other senior Russian guards could lead to up to five years in jail.

Previous : ‘I couldn’t have sex and had to crawl around my home in pain due to chronic UTI’
Next : Martyn Ford feared he would be arrested if he confronted Iranian Hulk in Dubai