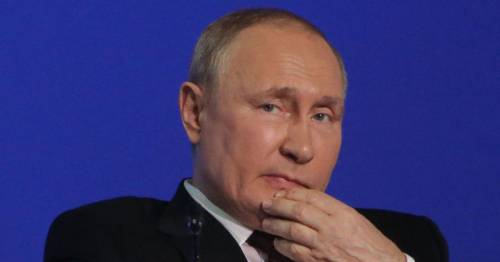 Allies of Vladimir Putin were today baring their teeth at ex-Soviet states Lithuania and Kazakhstan with direct threats of military action.

This came amid claims Putin could declare martial law and mobilisation in five Russian regions bordering Ukraine to boost his war effort.

Lithuania – a NATO state – was today rapidly becoming a flashpoint after it blocked goods sanctioned by the EU from reaching Russian exclave Kaliningrad.

Any direct Russian attack on alliance member state Lithuania would be seen as an act of war against NATO.

As such, it would likely trigger World War Three.

Russian state TV reporter Grigory Yemelyanov, from Channel 1, warned over footage of blocked trains: “The attempt to isolate the region is – from the point of view of international law – in fact a casus belli, a term meaning a formal reason to declare war.”

Another senator Andrey Klishas stated: “Lithuania’s attempt to establish a virtual blockade of the Kaliningrad region is a violation of Russia’s sovereignty over this region and may be the basis for very tough and absolutely legal actions on the part of Russia.”

Putin foe Mikhail Khodorkovsky warned in The Financial Times that the Kremlin leader’s “next step” would be an “air blockade of Lithuania.

Putin greets the audience as he attends a concert marking the eighth anniversary of Russia's annexation of Crimea in Moscow on March 18, 2022
(

He added: “It will allow Russian aviation to fly right through between Russia and Kaliningrad. Then Nato will face a question of what to do.”

Former Russian presidential candidate Ksenia Sobchak – a TV presenter – warned: "After Lithuania banned the transit of sanctioned goods to the Kaliningrad region through its territory, Russian politicians and the media have started talking…the basis for declaring war.”

Putin henchmen were also warning of the threat of war in Kazakhstan after Putin was “humiliated” by Kazakh leader Kassym-Jomart Tokayev when they shared a platform together on Friday at Russia’s major economic summit in St Petersburg.

Tokayev snubbed Putin by refusing to recognise the Donetsk and Luhansk people’s republics as independent states.

One account said Putin was “literally furious” and felt humiliated – with some saying he's ready for “revenge”.

Chechen leader Ramzan Kadyrov warned Kazakhstan: “You’ve got to stand with Russia and show your position, and not be scared of US and EU sanctions.”

Kazakhstan and other ex-Soviet states were “all silent, fearing the sanctions of America or Europe”.

An oil exporting terminal in Kazakhstan had been disrupted by Russia, according to reports.

In another report General SVR channel claimed Putin has not ruled out a major mobilisation of half a million men in five regions of western Russia close to Ukraine.

This could happen if Ukraine hit civilian and military facilities on a continued basis.

The regions mentioned were Bryansk, Kursk, Belgorod, Voronezh and Rostov.

Previous : India cable car stuck: Tourists have to climb out using rope as it’s stranded high in air – World News
Next : Fake name Prince William used so that he could fly under the radar at university