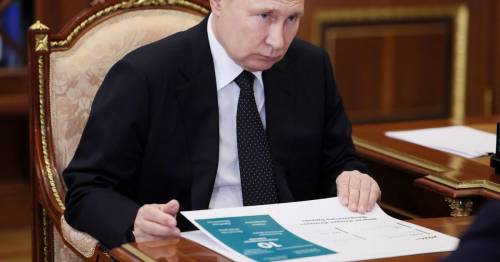 A speech by Vladimir Putin has been delayed because of a 'massive' cyber attack in Russia, it has emerged.

Kremlin spokesperson Dmitry Peskov said in a call with reporters that specialists were working to fix the problem, which has pushed the speech back an hour.

The incident was reportedly linked to a DDOS attack targeting the computer network at the St. Petersburg International Economic Forum – where the tyrant was due to speak.

Peskov said the cyber attack started on Thursday, disabling the forum's guest accreditation and admission system and creating a host of issues with access.

Putin's keynote address has been moved back to 3pm (1pm BST), he added.

The St Petersburg International Economic Forum has been targeted by a DDOS attack, according to reports
(

The economic forum, known as the "Russian Davos", had for years hosted world leaders and titans of business and industry.

But the annual conference will see little of the global financial elite this year with Moscow isolated by sanctions over its actions in Ukraine.

This week, to make up for the lack of major Western attendees, Russia is giving pride of place to smaller players or countries like China – the world's second largest economy – that have not joined in sanctions.

Earlier this year, it was reported that Russian hackers were plotting similar attacks on the NHS, nuclear power plants and Whitehall ministries.

The spy coalition urged them to bolster cyber defences as they face a heightened risk of Kremlin-sponsored attacks.

According to the alert, "evolving intelligence" suggests hackers within the Russian government are seeking to engage in "malicious cyber activity" in response to the "unprecedented economic sanctions" imposed on Russia following its invasion of Ukraine.

There is also concern that hackers are targeting critical infrastructure in countries that have provided "material support" to Ukrainian forces.

In response to the increased risk, the Five Eyes alert outlines a number of immediate actions critical infrastructure organisations can take to “prepare for and mitigate potential cyber threats”.

Chancellor of the Duchy of Lancaster Steve Barclay, the minister responsible for cyber security, told The Daily Telegraph: “Cyber attacks recognise no physical or geographical boundary and it has never been more important to plan and invest in cyber resilience.”

Previous : Man found half-eaten by crocodile after friends watch him being dragged underwater – World News
Next : Quick-thinking schoolgirls’ secret message to stranger saves them from ‘abduction’