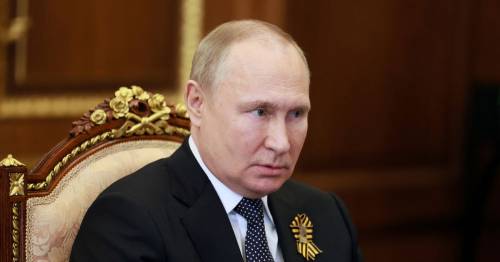 Vladimir Putin's invasion is "shamefully indecisive" a pro-Russia reporter has said in a rare admission.

Propagandist Aleksandr Sladkov, a war reporter for Russia's state-run Russia-1 TV channel, said Putin's troops "can't push out Ukrainian forces" and they are "making a feat out of something that should be routine".

Sladkov's negative comments are rare as it aligns with a US official's statement that Putin's military has made much progress in the Donbas as they continue to face fierce resistance from Ukrainian forces.

A senior US official has also claimed that some Russian officers are disobeying military orders.

Sladkov's video was filmed in Donestk, in eastern Ukraine and started with him saying the "scumbags from the Ukrainian armed forces" were behind the shelling in the area that killed a woman and teenage boy.

He said: "You know why [these attacks] are happening?

"We can't push out Ukrainian forces from the city. We can't push them out. Because… I don't know. We shouldn't criticise but… we are assaulting with one to one ratio, their villages and their strong points… one to one."

He continued: "We are making a feat out of something that should be routine. You see? Their forces keep coming, we can't close the salient (a military term that can also be called a bulge into military territory).

"I understand it's difficult to talk about this, but at least some fool needs to announce it! Even if today. Even if it's me."

He added: "The morale is not decreasing, it's positive, no, we're ready to fight! We're going forward, assaulting, even those who to say it softly we're quite indecisive at this war… em… special operation. Shamefully undecisive.

"Even they are moving forward, they start feeling that [they] can win, but… I don't know what sort of sportlike approach this is when this proportion is being held – god forbid more troops would fall onto the enemy! They killed a woman and a 16-year old boy. That's how it is."

It comes as a US official has said Putin's officers are disobeying orders and commands.

Foreign Policy reporter Jack Detsch tweeted: "US has seen indications that some Russian officers are refusing to obey orders or not following commands with 'alacrity in Donbans>"

He cites a US defence official as the Washington Post reports that the troops disobeying orders tend to be middle-ranked officers and appear to have positions as senior as battalion commanders.