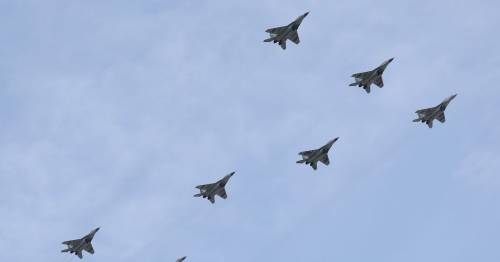 Russian jets appeared to gloat about the devastating invasion of Ukraine by forming a 'Z' formation in Moscow ahead of a huge military parade.

Preparations are underway for Monday's Victory Day celebrations, which will see thousands of troops and military hardware on show in Red Square.

The annual parade, which marks Nazi Germany's defeat in 1945, has become a showcase of military strength under Vladimir Putin.

Today eight planes were seen forming a 'Z' in the skies above the Kremlin.

The letter has come to represent the illegal incursion into neighbouring Ukraine, which has seen thousands of lives lost with Russia taking huge losses.

Preparations are underway for the annual event, which marks victory over Nazi Germany
(

The parade will be overseen by the Russian president, who is expected to deliver a speech.

His former speechwriter Abbas Gallyamov told the BBC: "Everyone is expecting something to happen [on 9 May], both the enemies of Putin and his supporters.

"These expectations created a vacuum that needs to be filled. If it's not, Putin will lose politically."

It is expected that the armed forces will show off hardware, including nuclear warheads, in a planned show of strength as Putin's forces fail to bring the invasion to an end.

Vladimir Putin will address the Russian people during the parade
(

Russia has been expected to further escalate attacks on Ukraine in the build-up to Monday's anniversary.

In a statement today US Secretary of State Antony Blinken said the Ukrainian people "embody the spirit of those who prevailed during the Second World War".

He continued to accuse Putin of attempting to "twist history to attempt to justify his unprovoked and brutal war against Ukraine".

In a statement marking 77 years since the Allied victory in Europe, Mr Blinken said: "As war again rages in Europe, we must increase our resolve to resist those who now seek to manipulate historical memory in order to advance their own ambitions."

Ukrainian president Volodymyr Zelensky has said bridges with Russia are not yet "destroyed", leaving the door open for future negotiations.

However, he said talks can only take place if Moscow withdraws to its pre-invasion positions, as of February 23, saying he was not elected to lead "a mini-Ukraine of some kind".

Speaking at an event hosted by the Chatham House think tank, said arrangements were needed for discussions to "stop the killing", with "diplomatic channels" used to regain Ukraine's territories.

The prerequisite for this would be "regaining the situation as of February 23", he said.

"They have to fall back," he added.

"In that situation we will be able to start discussing things normally."

He said that "despite the fact that they are destroying all our bridges, I think not all the bridges are yet destroyed", figuratively speaking..

Western officials say they had been told Russia had made the "unusual" move of "not inviting" foreign leaders to celebrate Victory Day.

They said that the national holiday, which usually commemorates victory over Nazi Germany in 1945, may be used by Russian president Vladimir Putin to claim the attacks on Ukraine have been successful.

There could be a big announcement, they said, however it is unlikely to be a declaration of war, or mass mobilisation, which has been denied by the Kremlin, as officials have not seen any signs to indicate preparation is under way for either.

Previous : Five-day heatwave kicks off as Brits pack beaches and parks with 26C sunshine on the way
Next : TUI passengers fume in huge Birmingham Airport queue so big it snakes out the front door