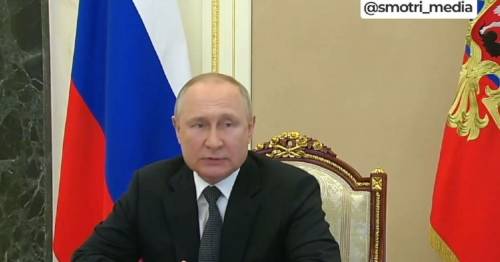 Russian leader Vladimir Putin appeared at a virtual meeting of his security council with a 'bloated head that is too big for his body' commenters say.

There was even a claim his head had been artificially attached to his body in manipulated footage.

The appearance came amid opposition claims that Putin is due to have surgery imminently as his health sparks debate around the world.

Today he made an online appearance with security council members and also spoke by phone to German Chancellor Olaf Scholz, said the Kremlin .

Putin again didn't look himself, with more questions asked about the state of the leader's health.

One comment on his video appearance read: “His face and head look so bloated, especially his cheeks and around the back of his head.

“He looks photoshopped onto his body. It’s clearly him, but what a strange look.”

Another said: “Either his clothing is too tight around the neck, or he sits in an unfortunate position.

Russian President Putin has faced questions about his health for months
(

“But the layer of skin and fat over his neck looks really uncomfortable.”

Putin was spotted on Tuesday keeping warm with a heavy blanket as he oversaw the massive parade to mark the day when Russia effectively brought World War Two to a close.

He sparked more rumours over his ill health after being seen coughing at Russia’s Victory Day parade with a blanket draped over his legs.

Putin told Scholz about “the logic and primary objectives of the special military operation protecting the people's republics in Donbas and spoke about measures providing for the security of the civilian population”, reported Interfax.

He told the German leader that “civilians held by Ukrainian servicemen on the premises of the Azovstal steelworks in Mariupol had been evacuated with the participation of representatives of the United Nations and the International Committee of the Red Cross."

And he sought to convince the German leader of “the ongoing flagrant violations of the norms of international humanitarian law and the inhumane terrorist methods applied by fighters adhering to Nazi ideology”.