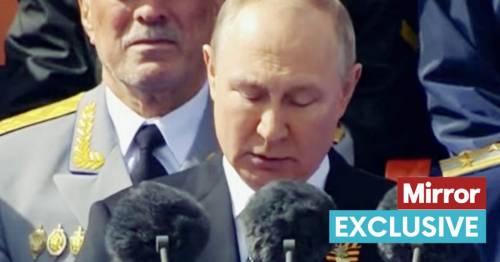 Vladimir Putin's "rocking back and forth" and "pinched brows" during his Victory Day speech today could be a sign of health issues, a body language expert has speculated.

Following the Kremlin boss' 11-minute speech in Moscow's Red Square this morning, he was seen with a blanket over his legs and coughing during the military parade.

It has sparked more rumours about his ill health as none of the other senior Kremlin dignitaries watching the march past felt the need for a blanket in the 9C Moscow weather.

Putin's speech – his first major televised address since March 18 – comes amid further defiance from Ukraine's leader, who issued a statement also marking the 77th anniversary of victory in Europe.

Mike Carter, a body language expert, watched Putin's speech and has dissected three points in the warmongering Russian President's posture that be could a sign of discomfort or pain.

Mr Carter told The Mirror: "We hold our breath or breathe this way when something physically or mentally isn't right."

An example he gave is when someone in an office complains of a bad back and might not take any breaths.

He said: "His breathing is very shallow which could be some kind of pain he is enduring.

"We hold our breath when something mentally isn't right.

"If someone was very distressed in your office you'd say 'take a deep breath'."

He added this could also mean he was short of breath, another indication something may be wrong.

In a separate analysis, Mr Carter explains how Putin rocking back and forth can signal "agitation", but it can also indicate a health problem.

At 69, it has been speculated Putin has serious health problems from Parkinson's to cancer.

Mr Carter also highlights that Putin stands with his feet wide apart in a 'power stance', which could also be to prevent him from falling.

He said: "The constant rocking could be a health issue and that he's worried he might fall over.

"He rooted himself behind the lecture and that could be for medical reasons."

He added: "From the side angle standing with his feet wide apart, which is a power pose.

"He could be standing in this pose to prevent from falling over."

During the speech, Putin is seen to rest his hands on the lectern
(

It comes as Putin is alleged to be due to undergo surgery, possibly for cancer, according to alleged leaks from within the Kremlin.

It comes after the Telegram channel General SVR – allegedly run by an ex-Russian Foreign Intelligence Service lieutenant general – said the despot has been informed by doctors the op will incapacitate him "for a short time".

And as such he will supposedly briefly hand over the reins of power to an aide.

There has been no official confirmation in relation to Putin being in ill health.