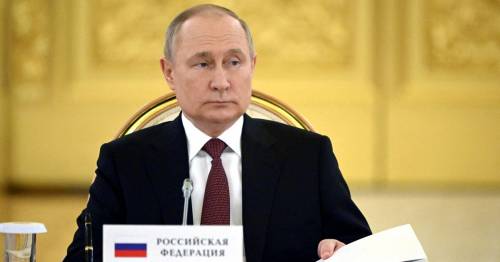 Vladimir Putin has been warned he risks the fate of Libyan tyrant Muammar Gaddafi or Yugoslav dictator Slobodan Milošević unless he changes course in his war with Ukraine.

He faces stark failures by his army, secret services and political cronies, said the man who helped him annex Crimea and subjugate the Donbas in 2014.

“[There must be a] change of at least part of the team, who are not only thieves…and scumbags…but who also failed in everything they were entrusted with, entirely,” warned Igor Girkin, an intelligence and army veteran, formerly a staunchly pro-Putin commander.

Girkin is seen as speaking for hardliners who want to decimate Ukraine to win the war.

He was central to Putin’s annexation of Crimea, and establishing the puppet Donetsk People’s Republic eight years ago.

This military and security bloc are losing their loyalty to Putin because of the stunning failures of the war in Ukraine, his analysis suggests.

“Intelligence failed… both political and military,” said Girkin, 51, in a video.

“The army cannot fight normally because there is nothing [to fight with].

Russian President Vladimir Putin is heading for the same fate as executed Libyan tyrant Muammar Gaddafi, one of his former pals claims
(

“The FSB cannot catch criminals who flee abroad in droves.”

He claimed: “If such change does not occur, Putin will end up like Milošević in a best case scenario, in a worst case scenario like Gaddafi – but sadly not him alone – the entire country might end like this with him.”

The Serbian and Yugoslav leader died in 2006 in The Hague while facing an international war crimes tribunal.

Gaddafi died while on the run in Libya in 2011.

Igor Girkin is an intelligence and army veteran in Russia
(

He warned of Russia “turning into Libya where everyone is fighting against everyone”, a scenario that was “more than likely with partial foreign occupation — and complete and final destruction of the country.”

YouTuber Ivan Yakovina, 42, with 743,000 subscribers, said that Girkin is believed to work “for some dark, chthonic forces in Kremlin/FSB”.

He said: “If that is so, then these forces are very dissatisfied with Vladimir Putin.

“Through Girkin's mouth they claimed that Gaddafi's destiny awaits the Russian president, and Libya's destiny…

He was executed while on the run in Libya
(

"To put it directly, they are already threatening Putin, demanding to proclaim a fully-fledged war against Ukraine.

“In my opinion, this is a very interesting dynamic.

“The most hateful… are coming out of Putin's grip and are licking their lips like predators anticipating him, sitting in his luxurious bunker 'too weak and liberal'.

“Military and special services are showing their teeth now.”

These were the hardliner military and security who “have weapons and the skill to use them”, said Russian-born Yakovina, from independent NV magazine and website, based in Ukraine.

Girkin – also known as Igor Strelkov – is wanted in the West over the shooting down flight MH17 over eastern Ukraine in 2014.

Previous : Dog walker’s warning as buzzard swoops and tries to grab chihahua in park
Next : Expert shares how to teach your dog to swim and stay safe in water