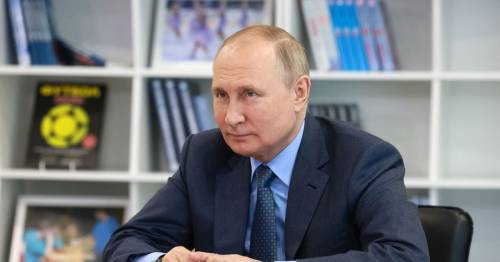 A Ukraine army boss claimed Russian President Vladimir Putin has cancer and is in a 'very bad condition'.

Major General Kyrylo Budanov said: "Mr Putin is in a 'very bad psychological and physical condition and he is very sick'.

He claimed the Russian President has cancer and 'illnesses', while dismissing suggestions he was spreading propaganda.

Ukraine's head of military intelligence predicted the war with Russia would end a turning point by the middle of August and would be over by the end of the year.

He said he was 'optimistic'.

General Budanov said they would gain back Ukrainian power in all the territories they have lost including the Donbas and Crimea.

He also told Sky News defeat in Ukraine would lead to the removal of Russia's leader.

It comes after Budanov said Ukraine will fight for the remote Zmiinyi Island (Snake Island) in the Black Sea "for as long as is needed".

Ukraine's head of military intelligence speaking on the war with Russia
(

In comments on Friday he said: "Whoever controls the island can at any time block the movement of civilian ships in all directions to the south of Ukraine.

Renewed fighting around Snake Island in recent days may become a battle for control of the western Black Sea coast, according to some defence officials, as Russian forces struggle to make headway in Ukraine's north and east.

Earlier The Mirror reported on how commentators said Vladimir Putin appeared in a virtual meeting of his security council with a “bloated head” that looked like it was Photoshopped onto his body.

A claim said it looked as though the Russian President's head had been artificially attached to his body in manipulated footage.

The appearance came amid opposition claims that Putin is due to have surgery imminently.

Previous : Former security guard to the Queen jailed for sexually abusing children as young as 13
Next : ‘Obsessed’ policeman jailed for making false claims about woman he met at nightclub