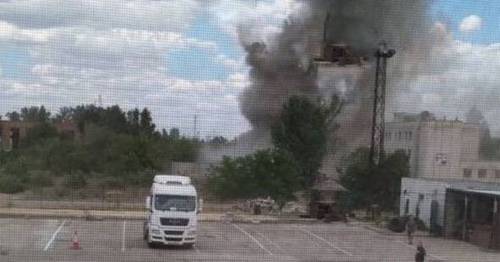 A Russian ammunition depot has been destroyed by Ukrainian forces in what will be another blow for Vladimir Putin.

Pictures show black smoke billowing into the sky after the missile attack on the outpost in the occupied Kherson Oblast, reports the Express.

Snaps from weapons trackers were published on Thursday and claim to show the damage caused by the strike in the city of Nova Kakhovka in southern Ukraine.

Another photo shows the remains of an exploded missile with an upturned truck in the background. Three Russian supply trucks are reported to have been hit in the attack, as well as an auxiliary armoured vehicle.

Confirming the attack on Ukraine 24, a nationwide television channel, Serhiy Khlan, an adviser to the head of the Kherson Oblast State Administration, said: "Today at noon our Armed Forces hit the ammunition depot and the military equipment repair centre, which was in Nova Kakhovka in one of the industrial districts, very punctually and purposefully. It arrived there very clearly. It detonated from noon until late in the evening."

The aftermath of the missile strike of a Russain supply depot

The blast also caused trees to be decimated as well as a supply truck which was marked with the now well-known 'Z' symbol.

Kherson, a coastal region where mainland Ukraine meets Crimea, is currently occupied and controlled by Russian forces – which entered via Crimea in the initial invasion.

Ukrainian President Volodymyr Zelensky has repeatedly stated that he would only settle for Ukraine’s full sovereignty being restored, and has hinted at a desire to return to the nation’s pre-2014 borders.

Russia ’s military failings in the invasion have likely cost the far superior army the chance at a complete invasion, and have indicated a move towards annexing the Donbas region to the east.

Smoke could be seen billowing into the sky

It came on the eve of Boris Johnson pulling out of a conference of northern Tory MPs at the last minute in order to jet out to Kyiv for a surprise visit to Ukraine.

The prime minister met Ukraine President Volodymyr Zelensky on Friday where he offered a major training programme to support Ukraine troops, with the operation having the potential to help up to 10,000 soldiers every 120 days.

Mr Johnson said: "My visit today, in the depths of this war, is to send a clear and simple message to the Ukrainian people: the UK is with you, and we will be with you until you ultimately prevail.

"As Ukrainian soldiers fire UK missiles in defence of your nation’s sovereignty, they do so also in defence of the very freedoms we take for granted.

"That is why I have offered President Zelenskyy a major new military training programme that could change the equation of this war –harnessing that most powerful of forces, the Ukrainian determination to win.

"Two months on from my last visit, the Ukrainian grit, determination and resilience is stronger than ever, and I know that unbreakable resolve will long outlive the vain ambitions of President Putin."

Mr Zelensky remarked: “Many days of this war have proved that Great Britain’s support for Ukraine is firm and resolute.