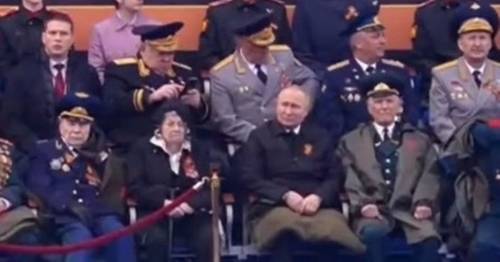 Vladimir Putin has sparked more rumours over his ill health after being seen coughing at Russia’s Victory Day parade with a blanket draped over his legs.

The Russian leader was spotted keeping warm with a heavy blanket as he oversaw the massive parade of his country’s military might to mark the day that Russia effectively brought World War Two to a close.

While it was a slightly chilly 9C in Moscow this morning, none of the other senior Kremlin dignitaries watching the march-past felt the need for a blanket – adding to concerns that the Russian leader’s health could be failing.

One user on Twitter commented on the blanket by tweeting: "President Vladimir Putin throws aside his Russian Wool blanket to stride manfully to the unknown."

While another joked that "Putin stole a blanket from a veteran" after noticing few others had one.

Despite his cough and the blanket, the President appeared to be in fine health during his speech and as he mingled with officials and spectators.

However, there have been reports that Putin was undergoing treatment for both cancer and Parkinson’s Disease, even before he launched his attack on Ukraine.

The poor progress of his invasion seems to have taken an additional toll on his health.

In a televised meeting on April 21, the "bloated" leader, sitting at a desk and discussing the invasion with his defence minister Sergei Shoigu, seemed to be gripping the corner of his desk firmly in an apparent attempt to hid a trembling hand.

A report from Telegram channel General SVR claimed that Putin, who turns 70 in October, would be incapacitated "for a short time” this month following a surgical procedure.

The report added that he planned to hand the reins over to close aide Nikolai Patrushev, former chief of the Federal Security Service, while he recuperates.

Despite predictions of a fiery Victory Day speech, President Putin was somewhat muted this morning.

He attempted to justify the attack on Ukraine by drawing parallels with the Soviet Union’s struggle against Hitler ’s Germany but stopped short of announcing any major new escalation of the conflict.

Instead, by focusing on what he claimed was a Ukrainian plan for a major crackdown on pro-Russian communities in the Donbas region he appeared to be preparing the ground for a limited occupation of just that area and abandoning his wider claims on Ukrainian territory.

"You are fighting for our people in Donbas, for the security of our motherland, its future," he said.

The Russian public tend to be quite patriotic by nature, and are likely to have taken Putin’s words at face value.

However, some Russians tuning in to watch the parade on TV may have been met with a very different message.

The BBC's Francis Scarr reports that the name of every show had been changed to "On your hands is the blood of thousands of Ukrainians and their hundreds of murdered children. TV and the authorities are lying. No to war".