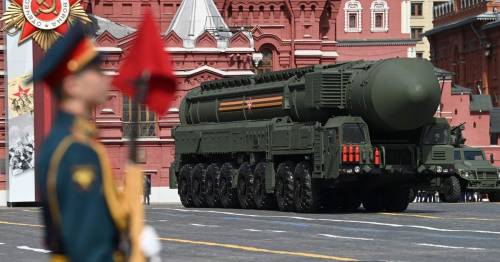 Vladimir Putin has issued a chilling new threat to the West as he flexed his nuclear arsenal during rehearsals for an annual military parade.

The thermonuclear RS-24 Yars ballistic missile was driven past rows of armed guards on a 16-wheeler earlier on Saturday as part of a rehearsal for Russia's Victory Day parade on Monday.

Experts fear the missile, which weighs nearly 50 tonnes, can carry up to 10 warheads as it was seen rolling through Red Square.

The intercontinental weapon can travel up to 24,500km/hr and is capable of hitting targets up to 12,000km away – meaning it could strike London within minutes.

The intercontinental weapon can travel up to 24,500km/hr
(

Experts believe the Victory Day celebrations, which mark the 77th anniversary of the Soviet Union’s victory over Nazi Germany, could be used to try and reignite the country’s stuttering invasion.

The parade will see Putin speak on the Red Square before a mass of troops, tanks, rockets and missiles.

The 69-year-old Kremlin leader has repeatedly likened the war in Ukraine to the challenge the Soviet Union faced when Adolf Hitler's Nazis invaded in 1941.

The annual parade will see Putin speak in Red Square before a mass of troops, tanks, rockets and missiles
(

The deadly missile being shown off in public is a chilling reminder of Russia's might as Putin flexes what his arsenal is capable of, reportedly desperate to officially declare war on Ukraine.

The UK's Ministry of Defence declined to comment on the missile display.

It comes as the former UK ambassador to Russia said Putin is in an "impossible position" as he's suffered heavy troop losses and "nobody will forget what he's done".

Sir Andrew Wood said he believes Putin has suffered more troop losses in Ukraine than Afghanistan and if the Kremlin boss continues on the warpath he's on there won't be "a settled outcome".

Speaking to Kay Burley on Sky News on Thursday morning, he said: "Well he thought he was going to win it a long time before, but in fact, he's losing it heavily and I think we have to realise that he cannot win the war in the sense of achieving a settled outcome.

"Nobody in Ukraine is going to forget what he's done and what his forces have done, and the way they've done it – that in itself is a defeat."

He said it is believed Moscow has already lost "more Russian troops to death than they lost during the war in Afghanistan" when 15,000 were killed.

Sir Andrew added this puts Putin in an "impossible position" in Ukraine.

The former ambassador added that Russian propaganda "doesn't care about the truth", suggesting that Vladimir Putin "will try and work up some kind of story" to account for the slow movement.

When asked if negotiations between Putin and Ukrainian President Volodymyr Zelensky are possible he said: "I don't think there will be any real dialogue until the results in the eastern regions are clear.

"If Russia continues to lose troops at the rate they are then they can have talked about Russia retreating, essentially.

"If he wins, by slaughtering more Ukrainians, it still isn't a victory because it isn't a permanent solution."