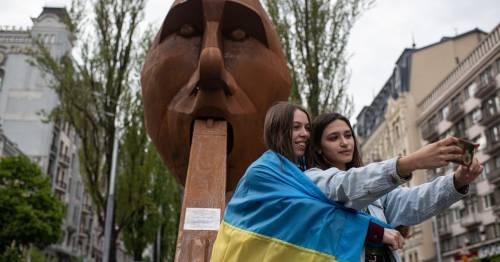 A huge sculpture showing Russian President Vladimir Putin with a gun in his mouth has been erected in Kyiv.

The 20-foot steelwork – titled 'Shoot Yourself' – was placed in the Ukrainian capital next to where a monument of former USSR premier Vladimir Lenin once stood.

The inscription underneath reads: "Putler, did you understand the hint?"

Despite Putin's insistence his invasion is to rid the neighbouring country of 'nazism', his barbaric behaviour has been frequently compared to Nazi leader Adolf Hitler.

The stylised head features cold eyes highlighted with little strips of barbed wire, while the gun, in comparison, is very realistic.

Sculptor Dmitry Iv has taken credit for the work, which remained in place for just eight hours on Saturday before being removed.

It survived for just eight hours before being removed
(

Passersby took the opportunity to get photos with it – including a woman draped in a Ukrainian flag – before it was taken away.

Many have been shared across social media.

The sculpture had taken around a month to create.

"Originally I had an idea to create something that would motivate our soldiers to keep on killing Russians," Dmitry told CTV News, while imitating putting a gun to his mouth.

The sculpture was created by Dmitry Iv
(

“The sculpture speaks for itself,” he said.

“Putin is a war criminal and war criminals can do two things. They can either be put in prison, or shoot themselves.”

Dmitry's works are shown around the world and he usually uses softer materials.

But he wanted to work with steel to symbolise the war.

“The war is tough,” he said. “Steel is tough. There should be no beauty in this.”

It was placed without permission from authorities in a Banksy-style guerrilla manoeuvre.

Dmitry did not want to talk about why the sculpture was removed.

He believes perhaps it was considered too provocative in the lead up to Victory Day or Europe Day, an annual celebration marking the end of World War Two.

Dmitry said the sculpture is now being held in a warehouse elsewhere in the city.

He said it is due to appear at a new venue.

Western leaders, including US President Joe Biden, have called for Putin to be tried for war crimes.

Rumours are rife, however, that the Kremlin despot is seriously ill.

He was pictured watching the Victory Day parade in Moscow on Monday with a blanket around his legs.