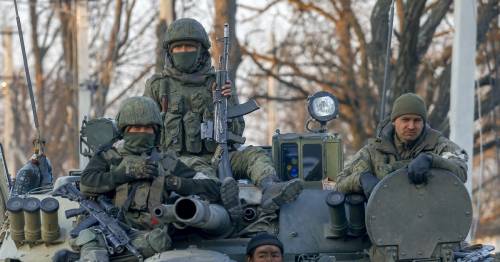 Desperate Vladimir Putin is "in trouble" and requires nearly 600,000 troops to turn Russia's invasion of Ukraine around, a top former NATO chief has claimed.

But the ailing President may decide to launch a tactical nuclear strike as a final throw of the dice, Sir James Everard has warned today.

The former NATO Deputy Supreme Allied Commander in Europe says the mission is far greater than he ever predicted and needs more than half a million more soldiers to make the deadly conflict a success.

Sir James believes the only way out now is to "significantly escalate" his forces – or send in the nukes.

The warlord faces the prospect of being toppled by his own generals if he didn't secure victory soon, he concluded.

"He is in a terrible place. It was entirely of his own making – he's in trouble" Sir James said.

"I can't see him achieving his objectives without escalating conventionally."

It may need 600,000 troops to turn Russia's invasion of Ukraine around
(

But Sir James said that a nuclear attack on Ukraine remains a prospect and a problem even though using "human logic" it might seem crazy.

"I think it would represent a grand strategic failure and I cannot believe the supporters he has around the world wouldn't melt away. It would mean more isolation," he told The Sun.

Putin’s invasion of Ukraine has seen the Russian forces suffer far greater losses than many expected and fail to make significant inroads into their neighbouring country.

At the Victory Day celebrations in Moscow earlier this week, Putin cut a sombre figure as he was unable to announce the breakthroughs he would have wanted.

Mr Wallace said Putin still had one sick trick in his "back pocket" that he said everyone should be worried about.

"If you win your war by killing, murdering, raping, bombing civilians, breaching all human rights, corruption and that becomes the battle winning components, the message that sends is incredibly dangerous," he said.

"You don't need training, kit, rule of law, you just need more brutality and be prepared to destroy everything in your path.

"That is still the untested component. They are not interested in occupying Mariupol – they've destroyed it, that's why it matters."

He added: "If Putin is successful in Ukraine then watch out."

Previous : ‘Frustrated’ dad in Spain holiday limbo as daughter, 11, waiting 5 months for passport
Next : Girl, 4, died after scorpion stung her twice when mum failed to notice the first – World News