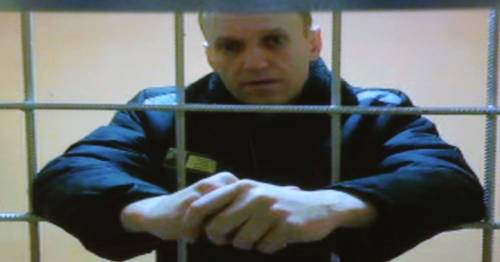 Vladimir Putin's nemesis Alexey Navalny has shared details about the grim punishments inflicted on imates in the infamous maximum-security prison he has been transferred to.

Opposition leader and staunch Putin critic Navalny suddenly vanished from one prison last week before showing up the next day at an infamous penal colony known for the rape of male inmates.

Last Tuesday he failed to attend a meeting with his lawyers at the Pokrov penal colony, where he was serving a nine-year sentence on graft charges.

His followers were relieved when he revealed on social media he had been moved to maximum security prison IK-6 Melekhovo, about 250 km (155 miles) east of Moscow, adding he had gone from “ship to ship.”

The Kremlin jailed Navalny in early 2021 upon returning to Russia after he was poisoned with novichok during a visit to Siberia in 2020, which is widely thought to have been orchestrated by Putin and his cronies.

Before his incarceration, Navalny was the strongest political opponent to tyrant Vladimir Putin
(

But now a week after the move, Navalny has revealed the extent of the horrors he's been subjected to inside.

Relaying his words from behind bars, his team wrote on Twitter : "I guess I'm never going to become a reformed prisoner

"I've only spent a week in my new cosy high-security prison, and I've already received a 'reprimand by the rights of the head of the institution'."

Navalny claims that if he gets another reprimand – which are doled out for arbitrary reasons or even concocted by the cruel guards – he could be sent to a "punishment cell".

Navalny says guards persuade inmates to do their dirty work by giving them favours, like family visits
(

There he said prisoners could "easily die of pneumonia" or "break your neck falling from the bed".

He said prisoners are employed to do the guards' dirty work through rewards like family visits.

He said these "reprimands and rewards are an essential part" of life in the max security penal colony.

Navalny said that "beatings and torture" are also everyday events.

Putin's foe previously said he wants to replace the tyrant as president and believes he would win an election – if it was not rigged in the Kremlin leader’s favour.

Navalny was poisoned with the novichok nerve agent
(

When he resurfaced last week, his team Tweeted: "Very outraged.

“Space travel continues – I moved from ship to ship. Well, that is, hello to everyone from the strict regime zone. Yesterday I was transferred to IK-6 "Melekhovo".

"Everything else is ok. Hello everyone, I hug everyone, eat the bird without breading."

IK-6 Melekhovo is renowned in Russia for its brutal beatings as well as rapes of male inmates.

Navalny also mused about cultural life behind bars, as well as the lawlessness he has faced since his incarceration.

He added: " I almost moved while I was dragging books into / out of the paddy wagon that I have in my warehouse.

"The jailers almost moved while they were copying them. And this despite the fact that, fearing such a situation, a month ago I hardly persuaded the administration to accept 50 books from me in the prison library. Honestly, yesterday for the first time in my life I dragged these bags and thought that a fire made of books is not necessarily something bad.

"About lawlessness: an announcement hangs in quarantine with a list of professions that can be obtained here, and the duration of training."

Navalny was given a nine-year term in 2021 after a Russian court found him guilty of fraud charges. They also fined him 1.2 million rubles (around £17,500).

Previous : How Prince William and Kate met and the raunchy catwalk that left Will lusting
Next : Man, 83, has baby with 35-year-old wife but says he won’t see son grow up – World News