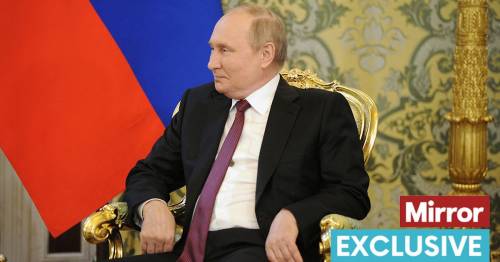 Vladimir Putin 's aggressive decision-making in the war in Ukraine is because he is on a high dosage of steroids, a medical professor has claimed.

The unconfirmed rumours of the Russian President 's ill-health have been wide-ranging from mental illnesses, cancer, and Parkinson's.

Senior figures in the Five Eyes intelligence alliance – Australia, Canada, New Zealand, the United Kingdom and the United States – have cited Kremlin sources as saying they believe there is a physiological explanation for the Russian president’s globally denounced decision to start a bloody war in Ukraine.

They say he has so-called ‘roid rage’, which is caused by the prolonged use of steroids.

Professor Angus Dalgleish of St George's, University of London, agrees, telling The Mirror: "We hear all the things that people say about him such as him losing his temper quickly and he's very frustrated so I think that he's clearly been on anabolic steroids."

Professor Dalgleish says the Kremlin brute is a narcissist who does egomaniac things such as posing bare-chested on horses.

"Those sorts of people are likely to be taking anabolic steroids," he continued.

His decision to invade Ukraine has been widely condemned and led to the death of over 4000 civilians, with the true toll believed to be higher.

Professor Dalgleish said if people give Putin advice he doesn't like, "he basically ostracises them, fires them or put them under house arrest".

This abnormal dictator behaviour further makes the Professor believe that "steroid use is affecting his decision making".

Other doctors and spies have also claimed his “bloated” appearance could be another side effect of him taking steroids.

Former foreign secretary Lord David Owen said he suspects steroid use due to changes in the shape of Putin's face, which is markedly puffier than a few years ago.

A security source told the Daily Mail: "There has been an identifiable change in his decision-making over the past five years or so. Those around him see a marked change in the cogency and clarity of what he says and how he perceives the world around him."

Professor Dalgliesh is not alone with his theory and the former head of MI6 Sir Richard Dearlove told GB News: “That maybe Putin’s behaviour, maybe his rationality is prejudiced or compromised by illness."

Previous : Summer of discontent as UK hit by new Covid wave, strike chaos and rising prices
Next : University tells students they can pass their swimming test ONLINE due to Covid outbreak – World News