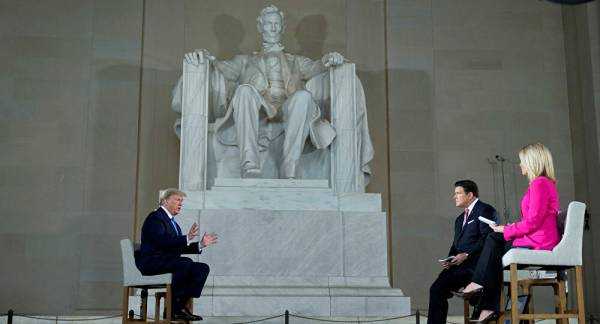 Over half a billion people contracted the Spanish flu between 1918-1920, at the end of what was one of the world’s deadliest conflicts, leading to more deaths than every battle in the first world war, combined.

US President Donald Trump was met with confusion and disbelief on Sunday night after he claimed during an interview that the Spanish Flu began in 1917 and “probably” was responsible for ending World War One.

Speaking at a Fox News virtual town hall meeting staged in front of the Lincoln Memorial, Trump stated that “so much” has been written about the deadly 20th-century flu that “killed between 50 to 100 million people” and likely led to ending the first world war because, according to the president, the soldiers became ill.

​Viewers were quick to point out that the Spanish Flu began in 1918, a year after which the pandemic is sometimes named, and that it is not considered to be the cause of the conclusion of World War I.

Social media corrected and poked fun at the president for muddling history.

​​Some made comparisons with the Trump administration’s attempts to direct blame for the coronavirus crisis elsewhere and the claim of a foreign origin of the “Spanish” flu.

​What Did Trump Get Wrong?

Numerous causes are credited for ending the first world war, including a belated intervention by the United States, but the Spanish Flu outbreak is not among them.

Three waves of the Spanish Flu plagued Europe and the rest of the world from spring 1918, fall 1918, and winter 1919. The deadliest of which was the second, afflicting Europe as the war was coming to an end but reports were suppressed by both the Allies and the Central Powers to maintain morale.

Spain, which was neutral during the war, was the first nation to publicize information about the virus, which caused the deadly disease to be dubbed the ‘Spanish Flu’ despite likely having originated in the United States.

Trump has previously raised eyebrows regarding his comparisons of the early 20th century influenza and the ongoing coronavirus pandemic.

In March, Trump claimed that those who were infected by the Spanish Flu had a “50/50 chance, or very close, of dying”, a flase assertion, as revealed in an analysis published in the American Journal of Epidemiology.

Previous : US Treasury to Borrow $2.99Trln to Fund Economy Through COVID-19 Pandemic – Statement
Next : Top US House Republicans Launch Probe Into China’s Influence on American Colleges