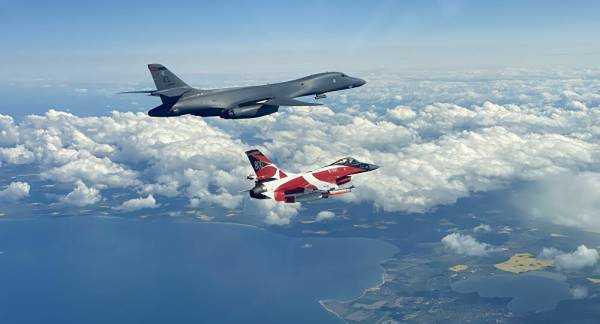 Two of the US Air Force’s B-1B Lancer supersonic bombers flew from South Dakota to the Baltics to participate in NATO drills earlier this week, including live-fire drills just miles from the Russian border. It was just the latest globetrotting flight by the heavily overworked planes in recent weeks.

‘No Target is Too Far Away’

Earlier this week, two Lancers flying from Ellsworth Air Force Base in South Dakota paid a visit to the Baltic Sea for drills with several NATO partners, according to a Wednesday news release by US Air Forces in Europe and Air Forces Africa. While the release gave no duration for the flight, Estonian Public Broadcasting reported it was a 24-hour round trip.

According to the Estonian Defense Ministry, the bombers took part in the “Spring Storm” live-fire military exercises.

“Led by Estonia, Spring Storm tests the integration between NATO troops and the Estonian Defence Forces (EDF), strengthening their ability in times of crisis. Due to the COVID-19 pandemic, this year’s exercise is scaled down, with around 3,200 troops participating, compared to 9,000 last year,” NATO said in a Wednesday release. Estonia joined the Western alliance in 2004, 14 years after declaring independence from the Soviet Union and leaving the Warsaw Pact alliance of Eastern European socialist states.

“It is important that our allies understand that security cannot be put on pause for the duration of the pandemic,” Estonian Defense Minister Juri Luik said Tuesday, according to the Baltic Times.

The last time Lancers were in Europe was in November 2018, during the Trident Juncture NATO war games.

Monday’s flight was just the latest by the Air Force’s Lancers to spots across the planet. Last Friday, two Lancers were dispatched on a 32-hour round trip from Ellsworth to the South China Sea. The day prior, Chinese People’s Liberation Army (PLA) Navy forces had ejected a US warship engaged in a provocative “Freedom of Navigation Operation,” in which US forces flagrantly flaunt Chinese territorial claims by sailing through Beijing’s claimed territorial waters as if they were actually international waters.

This past Sunday, four Lancers were sent to Andersen Air Force Base on Guam in the Philippine Sea, bringing what Pacific Air Forces chief of operations force management Lt. Col Frank Welton called “an advanced stand-off, counter-ship capability,” now that it can carry the Long-Range Anti-Ship Missile (LRASM). As Sputnik has reported, the Pentagon hopes long-range weapons like the LRASM will help it turn the tide against the PLA’s superior long-range rocket weapons.

While Washington has carefully postured as ready to strike anywhere with its strategic bomber fleet, Pentagon brass has been frank about how heavily the Lancers have been overworked in recent years, severely limiting both the numbers of available planes and the performance of those still able to fly.

In late 2019, the Air Force considered ending regular use of the Lancer’s terrain-following technology in an attempt to minimize wear on the planes. Sputnik reported the previous August that only six of the 61 bombers were mission-ready.

The June prior, the House Armed Services Seapower and Projection Forces Subcommittee fretted in its version of the 2020 National Defense Authorization Act that “B-1 readiness does not have the priority and resources to improve B-1 mission capable rates,” noting there were so few aircraft available that pilots were being forced to fly other planes for training.

Instead, US Air Force Global Strike Command (GSC) is exploring repurposing its remaining Lancers as long-range missile platforms. By installing a Common Strategic Rotary Launcher in a refitted Lancer’s bomb bay and reinstalling missile hardpoints on the fuselage and wings, GSC demonstrated that a single Lancer could be loaded down with as many as 31 hypersonic missiles or 40 missiles of other types.

Previous : ‘Dry Law’ Turns 35: Lessons Learned From Gorbachev’s Anti-Alcohol Campaign
Next : Trump: China ‘May or May Not’ Keep Trade Deal With US