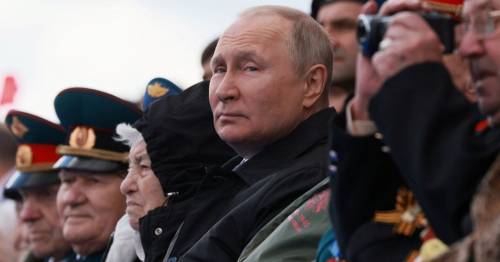 A caption appeared on hacked screens saying: “The blood of thousands of Ukrainians and hundreds of their children is on your hands.

“TV and the authorities lie. No to war.”

The hack impacted online viewers of various channels transmitted by MTS mobile operator, NTV Plus, Rostelecom and Wink, and hit viewers all over Russia.

The ‘No to War’ call came as Russians prepared to watch the annual Victory Day military parade on Red Square presided over by Vladimir Putin.

The message popped up on Russia TV screen this morning
(

The air display involving his Doomsday nuclear plane was abruptly cancelled at the last minute in Moscow ostensibly because of bad weather.

There were suspicions it was due to security reasons and the fear of attacks on aircraft.

Victory Day air parades were scaled back in Novosibirsk, in sunny conditions , and cancelled in Yekaterinburg, Murmansk and Samara due to 'bad weather'.

“A cyberattack was carried out on Russian TV broadcasting channels, because of which subscribers could have extremist inscriptions in the broadcast grid,” a spokesperson for MTS in Siberia said.

It is not known who is responsible for the hack
(

“Now our IT specialists are promptly eliminating the consequences of hack so that subscribers can receive services and watch TV programs and movies as quickly as possible.”

A viewer called Olga Ivanova said: “I have NTV Plus satellite TV and the same s*** is happening there on every channel.”

The source of the anti-war software attack was not immediately clear.

The Victory Day events in Russia today saw the country exhibit its military power with thousands of soldiers and fighting machines wheeled out for parades through major cities.

The day is as a celebration of the Soviet Union's defeat of Nazi Germany during WWII.

Ben Wallace, the UK's Defence Secretary, took today as an opportunity to draw a parallel between the Nazi's war acts and what Russia is doing today.

He said that Putin and his inner circle are now "mirroring fascism and tyranny" 77 years ago.

Speaking at the National Army Museum in Chelsea, south-west London, the Defence Secretary said: "Through the invasion of Ukraine, Putin, his inner circle, his generals, are now mirroring fascism and tyranny 77 years ago, repeating the errors of the last century's totalitarian regimes.

"They are showing the same disregard for human life, national sovereignty and the rules-based international system.

"The very system not least the United Nations Charter itself that we conceived together and for which we fought and were victorious together in the hope of saving future generations from the scourge of war.

"Their unprovoked, illegal, senseless and self-defeating invasion of Ukraine, their attacks against innocent civilians on their homes, their widespread atrocities, including the deliberate targeting of women and children, they all corrupt the memory of past sacrifices and Russia's once proud global reputation.

"The response to this failure by the Russian forces on the ground in Ukraine has in itself been a disgraceful display of self-preservation, doubling down on failure, anger, dishonesty and scapegoating."