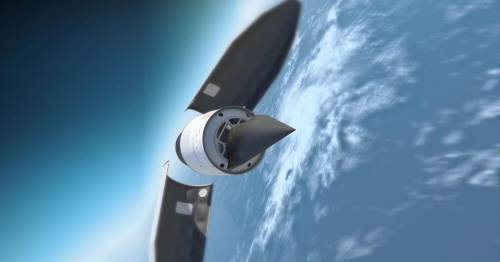 A hypersonic missile was fired at five times the speed of sound by China leaving America baffled, it has been claimed.

The test carried out on July 27 included the impressive technological feat which no other nation has yet demonstrated and completely caught the Pentagon unawares, according to US intelligence.

A hypersonic glide spacecraft with the ability to carry a nuclear warhead fired the missile mid-flight over the South China Sea.

The test seemingly defied the constraints of physics with experts at the US's Defense Advanced Research Projects Agency (Darpa) scrambling to understand how it was done, the Financial Times reports.

The agency is also attempting to work out the purpose of the missile launch, which appeared to have no obvious target.

The US and Russia have been exploring hypersonic weapons in recent years, but the test proves China's technology in the field is more advanced, experts have said.

The White House has reiterated its ongoing concerns about China following the incident.

A National Security Council spokesman said: "This development is concerning to us as it should be to all who seek peace and stability in the region and beyond.

"This also builds on our concern about many military capabilities that the People's Republic of China continues to pursue."

The glider launched into space on an "orbital bombardment system" rocket capable over flying over the South Pole, out of range of US defence missiles.

Experts fear the system means China now has a further means to attack the US.

China continues to build on its nuclear forces in ways which suggest it will ignore its own "minimum defence" position previously adopted.

The US, meanwhile, plans to quadruple its nuclear warheads to 1,000 in a decade.

Liu Pengyu, spokesman of the Chinese embassy, said: "We are not at all interested in having an arms race with other countries.

"The US has in recent years been fabricating excuses like 'the China threat' to justify its arms expansion and development of hypersonic weapons."

While US Space Force's vice-chief of space operations General David Thompson said the country is "not as advanced" as the likes of China or Russia in regards to hypersonic weaponry.

"We have catching up to do very quickly. The Chinese have had an incredibly aggressive hypersonic programme for several years," he added.

Vice-chair of the joint chiefs, General John Hyten, said the test "probably should create a sense of urgency".

It comes as the US have been called in to help find and salvage a downed fighter jet that crashed into the Mediterranean, it is reported.

The Royal Navy is reportedly working with the Americans to recover the stricken £100 million UK warplane that saw its pilot eject from the aircraft.

Elsewhere it was reported that Russia is now paying 'close attention' to the UK's flagship aircraft carrier in the region.

The pilot was part of the UK’s HMS Queen Elizabeth aircraft carrier strike force, which was practising for war.

It is believed the pilot is recovering and back on the ship following the crash which happened at 10am on Wednesday.

Previous : Disabled woman ‘slept on 2 chairs pushed together’ after being given unfurnished home
Next : Woman ‘fed up’ with work explains how she retired at 23 and earns £7,500 a month