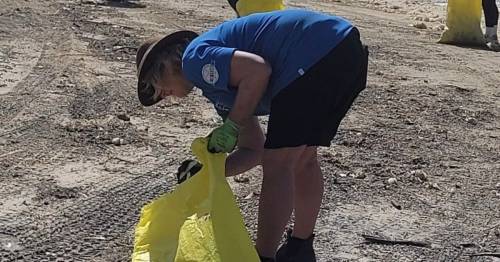 An urgent warning has been issued to Australians about toxic grey bottles that have washed up on beaches.

New South Wales (NSW) Department of Primary Industries urged the Ballina Shire Council in northern NSW to share information about the dangerous grey canisters due to recent wild weather conditions that could cause them to wash up on beaches.

The unmarked silver canisters could be fatal as they are said to be filled with aluminium phosphide, a toxic combination of chemicals that are used for pest control and in fumigation on ships. If the substance is inhaled it could be deadly.

Ballina Shire Council shared the warning but they said they had not received any reports of the canisters on local beaches or shorelines.

In a Facebook post, they said: "This canister, which contained aluminium phosphide pellets, was found at the Whitsundays after widespread heavy rain in central Queensland.

"If exposed to moisture, flammable and toxic phosphine gas is produced which can be incredibly dangerous, possibly fatal, for anyone who comes into contact with it.

"If you see something like this, never touch it. Often, like with this canister, the shell may be broken and toxic fumes can already be issued.

"If one of these bottles is found it is critical to not touch them, stand upwind to avoid possible inhalation, and to phone 000 immediately.

When the canister is opened, the 'rat poison' powder reacts with moisture in the air to release phosphine gas, which is also highly toxic to humans not just vermin.

Most aluminium phosphide is imported into Australia from China and Africa and it is not used in Australia, meaning it likely ends up on the shores from unreported shipping cargo losses.

ASMA says that although most canisters are airtight, there have been examples where the seals were broken, presenting a serious danger.

You should look out for a strong odour "that can smell like garlic, rotting fish or urine, but it can quickly dull the sense of smell."

Tangaroa Blue Foundation, a not-for-profit charity dedicated to the removal and prevention of marine debris, said the deadly canisters have been washing up on beaches for a decade and so far this year, four washed up along the Queensland coast.