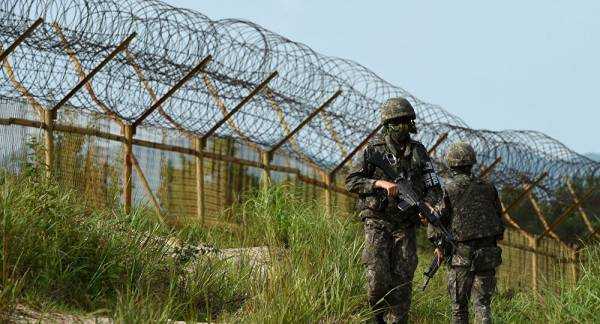 The United Nations Command announced on Friday it had discovered numerous “deficiencies” in the visual warning markers used to divert aircraft from the demilitarized zone (DMZ) separating North and South Korea. Photos show bent, dented and overgrown orange signs that a pilot might miss.

The UN Command announced the completion of its Aircraft Warning Panel Marker (AWPM) assessment in a Facebook post on Friday, noting it discovered “several deficiencies” in the 877 bright orange, rectangular markers that “serve as visual aids to aircrew so they do not mistakenly fly into the DMZ” and the Democratic People’s Republic of Korea (DPRK). The UN Command said it would work with its South Korean counterparts to “restore bad markers to useful condition.”

The command was formed in 1950 to coordinate the international military effort to support South Korea when war broke out with the North, and its commander is also the commander of US Forces Korea, a 28,000-strong force garrisoning the South. When the war did not end in a peace treaty in 1953 but a ceasefire agreement, the DMZ was established to separate the two Koreas and prevent a conflict from accidentally breaking out. The no man’s land is 2.5 miles wide and spans the width of the Korean Peninsula.

When relations between the socialist North and capitalist South reached new heights in the second half of 2018, the two sides signed an end of war declaration and pledged to work towards greater cooperation and integration. In October 2018, a new no-fly zone was announced over large sections of the DMZ, further limiting military operations near the de facto border.

On a lighter note, last July, South Korea scrambled fighter jets after it detected what was believed to be an aircraft bearing down on the DMZ, only to discover the encroaching “unidentified object” was just a flock of birds.