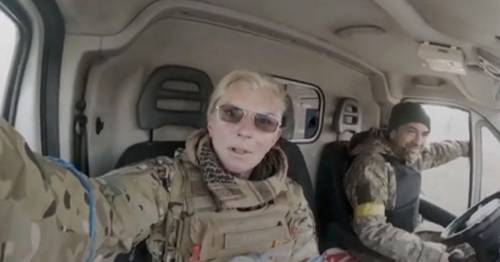 A heroic Ukrainian paramedic who was captured while filming for a Prince Harry-produced film for Netflix has been freed.

Yuliia Paievska, 53, known as Taira, famously smuggled out the footage on a data card that was hidden in a tampon.

Vladimir Putin ’s henchmen are furious she was let go as it appears they were unaware of a swap organised by associates of Chechen warlord Ramzan Kadyrov.

President Volodymyr Zelensky has hailed Taira’s release as it appears she was swapped for the son of a close crony of Kadyrov’s plus an alleged payment of £360,000.

Adam Saidov-Gritsenko, 20, was returned to Chechnya after being held in Ukraine – and going on TV to denounce Kadyrov as “cruel” and “ruthless”.

Yuliia Paievska, known as Taira, managed to share the harrowing footage with journalists before she was captured
(

He had appealed to Chechens to stop volunteering for the war to back Putin and Kadyrov.

They ”defame the name of good Chechens” who in Ukraine were “cruel, ruthless invaders”, he told Ukrainian journalist Volodymyr Zolkin.

There are fears his life could be in danger after being handed over to the Chechens after his criticisms.

War reporter on Russian state TV Channel 1, Irina Kuksenkova, said the “criminal transfer” of Taira to Ukraine had caused a “fierce fuss” and a “major showdown” in the Kremlin-controlled DPR.

After being released, Taira said in a video: “I know that everything will work out, and we will all be home as I am now.”

She had filmed the siege of Mariupol using a body camera that Netflix gave her for a film produced by Prince Harry.

She had been a star athlete who took part in archery and swimming in the Invictus Games for Ukraine, the international sporting competition for wounded soldiers created by the British royal.

She passed the harrowing war footage – concealed in a tampon – to an Associated Press team, the last international journalists in the city.

They passed through 15 checkpoints before successfully smuggling it out.

Taira's release has been celebrated
(

Soon afterwards, she was paraded on Russian television in handcuffs with a bruised face.

Earlier she had insisted on treating equally the Russian war wounded in Mariupol.

Her husband Vadim Puzanov hit out at Russian propaganda after she was captured.

“Accusing a volunteer medic of all mortal sins, including organ trafficking, is already outrageous propaganda – I don't even know who it's for,” he complained.

Her teenage daughter Anna-Sofia Puzanova, 18, had pleaded with the Russians to "bring back my mum to me".