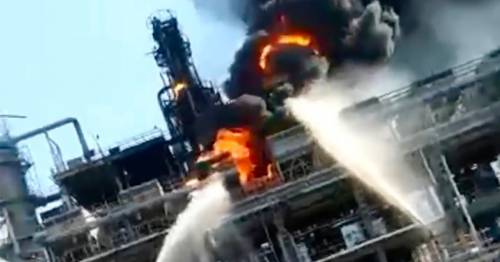 The military unmanned flying vehicle was seen low flying to the facility.

A huge explosion was heard ten miles from the Novoshakhtinsk oil refinery in Rostov region, which borders Ukraine, some four miles inside Russia from the pro-Putin puppet state Luhansk People’s Republic.

Flames were visible and black smoke poured from the key strategic facility.

Russian air defences failed to pick up the incoming drone, initially reported to be Turkish-made Bayraktar, but later said to be a Ukrainian UAV PD-1 or PD-2.

Some reports said the visible drone was one of two which targeted the facility.

It caused the explosion while another lay on the ground between two giant oil tanks.

Firefighters attempt to douse the flames at the oil refinery
(

Novoshakhtinsk oil refinery (Rostov region, southern Russia) on fire after the strike by a drone from Ukrainian side
(

Workers nearby are heard on a video as they watched the approaching military drone.

Initially they were relaxed as it flew close to them but they swore repeatedly as the unmanned craft struck the oil plant triggering a huge explosion.

One is heard saying: “It came from the Ukrainian side, didn’t it?”

There were two drones spotted flying towards the strategic facility, according to witness reports
(

Another replies: “The plant is on fire. F***ing run away.”

It is owned by the Research and Design Institute of Oil and Gas Peton, from Ufa, and previously belonged to offshore companies linked to Viktor Medvedchuk, a close ally of Putin detained by the Kyiv authorities, as had been suggested.

The refinery once belonged to close Putin ally Viktor Medvedchuk, who has been detained by authorities in Kyiv
(

The press service of the regional head office of the Russian Ministry of Emergency Situations acknowledged the blaze.

It claimed there was no threat of the fire spreading.

It reported there were no casualties.

The scale of the damage to Russian military oil supplies was unclear.

“At 09:25 am Moscow time, information was received that a fire had occurred in a heat exchanger at the Novoshakhtinsk oil refinery covering an area of 50 square meters,” said a statement from the Ministry of Emergency Situations.