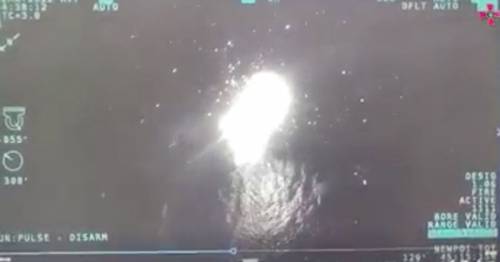 Ukraine has released a video claiming to show a military drone hit on a Russian landing ship supplying a TOR anti-aircraft missile system to Snake Island.

The footage appears to show the destruction of a large Serna-type landing craft in an air strike.

“Enemy units remaining on Snake Island remain without air cover and will be destroyed and burned out like cockroaches or locusts,” said Ukrainian official Anton Gerashchenko.

Other reports said the landing craft had been hit by a hit by a Ukrainian Bayraktar TB2 military drone.

The footage also showed an apparent attack on a building on Snake Island, the tiny Black Sea isle that made international headlines in February when Ukrainian border guards told the invading Russians to "go f*** yourself".

Video coverage of the attack on vessel was not dated in images.

After the strike, people were seen moving about on the vessel.

The Serna class – Russian designation Project 11770 – is a type of “air cavity” designed landing craft constructed for the Russian Navy.

The claim came a day after Ukrainian sources alleged they had struck modern Russian frigate Admiral Makarov in a Neptune missile attack.

The UK's Ministry of Defence, meanwhile, say Russia's latest and most advanced tanks are 'still vulnerable' after Ukrainian forces destroyed an armoured vehicle

It carries some weight in the Russian army, but the A modern T-90M tank, was seen being hit by a rocket in Kharkiv Oblast in the north-east of Ukraine.

A building before and after it was 'hit by Ukrainian missiles' at Zmiinyi (Snake) Island, Ukraine
(

The vessels were hit in the Black Sea by Ukrainian military drones in a further blow to Vladimir Putin – as shown in a dramatic video posted to social media on May 5.

He said it showed Ukraine's Bayraktar drone – made in Turkey – "works" against Russian forces.

An image of an 'explosion' at Zmiinyi (Snake) Island, released by Ukraine
(

The Mirror told yesterday how Finland’s relationship with Russia is at its most fractious since after Russia ’s invasion of Ukraine prompted the Nordic nation to apply for NATO membership.

British soldiers from the Queen’s Royal Hussars, meanwhile, are taking part in exercises in Finland.

The decision to join NATO has enraged Russian President Vladimir Putin, who many speculate is set to declare all-out war in Ukraine on Monday – Russia’s Victory Day.

The scene at Snake Island after an 'explosion' at Zmiinyi, Ukraine
(

Putin has vowed ­“consequences” and said he would move nuclear weapons to the nearby Baltic Sea if Finland, which shares a 830-mile border with Russia, opts to join NATO.

And a Russian lawmaker last month warned Finns would be “asking for the destruction of their country”.