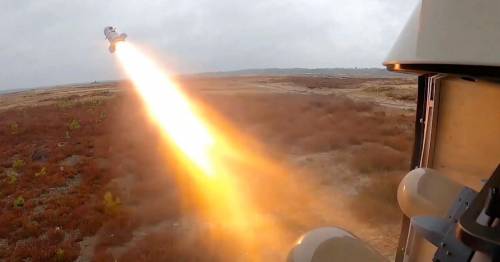 Ukraine has shown off its devastating British-made Brimstone missiles in action as the weapons are used against Russian forces.

The weapon has been adapted to be fired from small vehicles on the Ukrainian battlefield rather than used as normal from warplanes, drones of naval ships.

Video footage released by the Ukrainian defence ministry is said to shown the Brimstone and also the NLAW new generation portable anti-tank weapon.

A statement from forces said: “From the first days of the open invasion of Russia, the support of our foreign partners has played an important role in countering enemy forces.

“Weapons, material and technical means that give us fellow countries are our strength on the way to victory.

“We are learning fast and learning new weapons.

“And foreign instructors help us master them without delay.

“After all, we are fighting not only for the land.

“We fight for our principles, history, senses, for the very existence of the Ukrainian people, their values and freedom.

“And we are grateful that along this way, the titanic support is given to us by the partner states of the free world.

A rocket-propelled, radar-guided air-launched Brimstone missile designed to be carried by the Tornado GR4 and Typhoon F2
(

“Together for the Victory.”

The Brimstone came into service in 2005 with an updated version supplied to the RAF six years ago.

It can strike using laser-seeking guidance or autonomous targeting.

In another video, said to have been released by Ukrainian forces, it claims to show the Azovstal steel plant in Mariupol hit with incendiary of phosphorus bombs by Vladimir Putin’s forces.

AzovStal plant in Mariupol, Ukraine reported to have been shelled by Russian forces
(

Ukranian forces are believed to be sheltering there from Russian bombardment.

“The Russian military themselves claim that 9M22S incendiary shells with thermite layers were used,” said the Ukrainians.

“The combustion temperature is about 2-2.5 thousand degrees Celsius.

“It is almost impossible to stop the burning," said Petr Andryushchenko, an adviser to the mayor of Mariupol.

The Mirror told yesterday how Russia made new threats to use its Satan-2 hypersonic nuclear missile which it claims strike Britain in just 200 seconds.

UK Brimstone missiles are now being used by Ukrainian troops
(

Finland, which is poised to join NATO, would be totally wiped out in as little as 10 seconds, Aleksey Zhuravlyov deputy chairman of the Russian parliament’s defence committee claimed..

His wild threats came as senior Russian officials appear frustrated at Vladimir Putin ’s lack of military progress in Ukraine, and enraged at the show of Western unity against them.

Zhuravlyov, 59, claimed in an interview: “If Finland wants to join this bloc, then our goal is absolutely legitimate – to question the existence of this state. This is logical.

"If the United States threatens our state, it’s good: here is the Sarmat [known in the West as Satan-2] for you, and there will be nuclear ashes from you if you think that Russia should not exist.

“And Finland says that it is at one with the USA. Well, get in line."

Previous : Inside the world’s most violent prison – where inmates are beheaded in horrid massacres – World News
Next : Buffalo shooting: White supremacist who shot 10 dead called for Sadiq Khan’s death