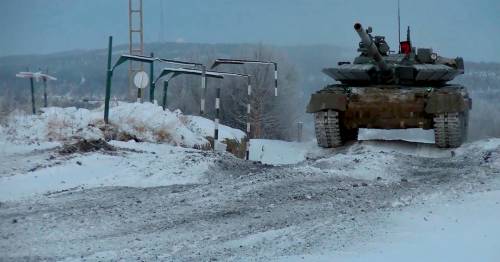 Ukraine government websites were hit with a devastating cyber attack on Friday in which officials were issued a chilling threat to "be afraid and expect the worst."

The crippling hack slapped messages in Russian, Polish and Ukrainian on official Kiev websites as Russian troops carried out snap drills near the border.

Senior US diplomat Michael Carpenter warned: “The drumbeat of war is sounding loud” as Russia and EU communication channels were severed.

Last ditch peace talks were being thrashed out between Washington and Moscow but Russian Foreign Minister Sergei Lavrov warned Russia and EU had cut off communication on Ukraine.

Many Ukraine official websites were taken off air after messages were posted on them screaming: "Ukrainian! All your personal data was uploaded to the public network. All data on the computer is destroyed, it is impossible to restore it.

"All information about you has become public, be afraid and expect the worst. This is for your past, present and future."

A service member drives a BMP-3 infantry fighting vehicle during military drills at the Kadamovsky range in the Rostov region, Russia
(

The United States warned the threat of a Russian military invasion was high as Moscow vowed dialogue was hitting a dead end.

The Kremlin has insisted on US guarantees that the west will bar neighbouring Ukraine from joining NATO and roll back decades of alliance expansion in Europe.

The United States has called the demands "non-starters".

It follows months of troops build-up by Russia close to Ukraine’s border, with 126,000 assault personnel now amassed close to the frontline.

A 250 mile-long frontier of trenches, artillery and assault troops has dug on both sides – with Ukraine forces defending.

The frontline which runs through contested Ukrainian territory of Luhansk and Donestk is threatened by pro-Russian separatists bolstered by regular and special forces from Russia.

In 2104 Russia forcibly annexed Crimea, sparking a war which has raged on the border ever since, costing the lives of around 14,000 people.