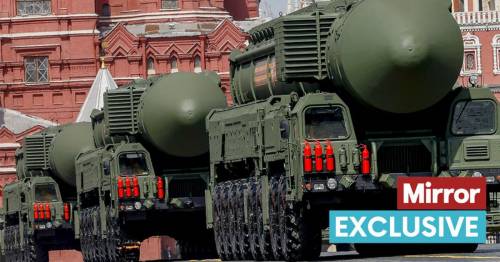 Cyber warriors in the Ukrainian IT army are targeting their enemy’s ­alcohol distribution.

The Kremlin-run internet system controls the supply of mainly vodka to factories and stores across Russia.

But according to the Moscow newspaper Vedomosti, factories are now unable to receive supplies of booze or transport it to shops.

And vodka-loving Russians who ­wanted to toast Monday's annual commemoration of the defeat of Nazi Germany in 1945 have a fresh reason to moan about their president’s war.

The Ukrainian hacking group delighted in their success by revealing Russian headlines about the mayhem. They jubilantly wrote on the Telegram messaging app: “Russian media reports about our progress!

“They’ve also mentioned that protracted disruptions would lead to suspending operations and thus result in decreased income to the aggressor country’s budget. That sounds like a good reason to push on!”

But security experts say Putin may ramp up war efforts on the important date in Russia’s calendar.

Ukrainian officials said Moscow is planning a Victory Day celebratory parade in the scorched hell of Mariupol on Monday.

Reports emerged of civilians still trapped there being forced to clear dead neighbours’ bodies ahead of the military show in exchange for food, water and medicine.

And in a chilling reminder to the West, nuclear missiles yesterday rolled through Moscow’s Red Square in a rehearsal for Monday.

Victory Day is celebrated on May 9
(

They included thermonuclear RS-24 Yars ballistic rockest which can travel at 15,000mph and hit targets up to 7,000 miles away.

If the 50-ton lorry-portable monster with multiple warheads was launched from the Moscow region it would devastate London seven minutes later, New York in 18 minutes and Los Angeles 25 minutes after blast-off.

Ukraine ’s first deputy interior minister Yevhen Yenin said: “The symbolic dates are to the Russian aggressor like red to a bull.”

One of Russia’s main propaganda peddlers, TV host Vladimir Solovyov, has flown to Mariupol to broadcast Putin’s claim of success in the invasion – despite slow advances in the Donbass region.

British intelligence today said the war was taking a heavy toll on some of Russia’s best units.

The MoD added: “It will take considerable time and expense for Russia to reconstitute its armed forces following this conflict.”

Previous : Boston Celtics guard Marcus Smart back for Game 3 after sitting out with quad injury
Next : Butlin’s ends decades-long ban on staff tattoos as part of recruitment drive