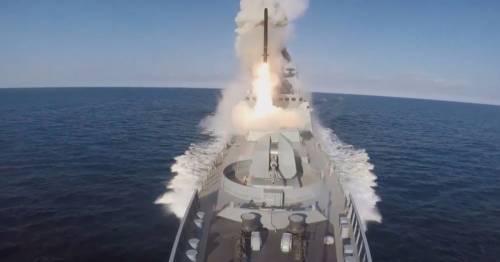 Ukraine is bracing for a wave of cruise missile strikes as six Russian warships are lined up and poised to launch an attack, Kyiv warned today.

The threat came as Ukrainian agents smashed a clandestine Moscow spy ring, arresting two key Ukraine figures in the capital for being on the Kremlin payroll.

And in eastern Ukraine both sides took up positions in Donbas as officials warned the next few days of street to street fighting will be the “bloodiest “ yet.

Each of the six Russian warships is armed with six Kalibr cruise missiles and are “most likely preparing for a massive launch of missiles on the territory of Ukraine,” said one Ukrainian official.

With a range of around 1,000 miles it is possible Kyiv and western cities could be hit by the supersonic weapons.

The possible launch of Kalibr missiles has Ukraine concerned
(

Image:
Ministry of Defense of Russia/Ne)

The Daily Mirror has revealed fears the Kremlin is preparing to step up missile strikes on cities throughout Ukraine including Kyiv, which remains target number one.

On Tuesday governor of the Luhansk region Serhiy Gaidai said Russian forces had gained some territory in the east but said of the current situation: “It’s a calm before the storm.”

Ukrainian President Volodymyr Zelenskiy had predicted Russia would step up attacks ahead of Thursday’s EU summit on Thursday which will discuss Kyiv’s wish to join the bloc and the biggest threat was to Severodonetsk.

Soldiers survey damage and salvage items after another Russian attack
(

Gaidai said Russian forces controlled most of Severodonetsk, apart from the Azot chemical plant, where more than 500 civilians, including 38 children, have been sheltering for weeks.

On Tuesday the first batch of German self-propelled howitzer artillery systems arrived in Ukraine in the first delivery of heavy weapons promised by Berlin.

It can hit targets 25 miles away and will give Ukrainians a chance if they can beat a race against time to get them to the frontline.

In Odesa, Ukraine’s biggest Black Sea port, which is blockaded by the Russian navy, a Russian missile destroyed a food warehouse this week.

Ukrainian intelligence operators have seized a senior government official and a business leader suspected of being part of an alleged Russian spy network, the Security Service of Ukraine said on Tuesday.

The Security Service (SBU) did not name the two suspects but identified them as a senior official in the Secretariat of the Cabinet of Ministers and a department head at the Chamber of Commerce and Industry.

It said in a statement the SBU said it had carried out a “multi-stage special operation” to neutralise the alleged spy ring.

It said: “As a result: in Kyiv the head of a department of the Secretariat of the Cabinet of Ministers and the head of one of the directorates of the Chamber of Commerce and Industry were detained.

“These officials passed on various intelligence information to the enemy:

from the state of our defence capability to arrangements at the state border and personal data of Ukrainian law enforcement officers.”

The two main suspects were shown sitting in front of a Ukrainian flag in a video admitting they had collaborated with Moscow.

The SBU said Russia paid the suspects thousands in dollars per mission, one of them saying had worked for Moscow since 2016, the other since 2019.