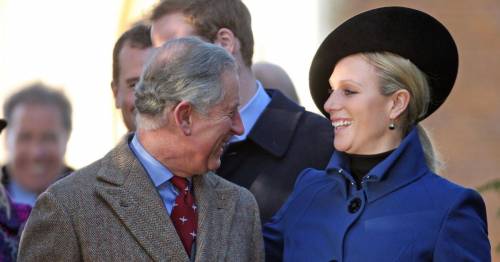 The couple decided to name their bundle of joy Zara, which is far from a traditional royal name.

And it seems the inspiration for her very un-royal name came from one of her much-loved relatives – her uncle Prince Charles.

According to Hello!, Zara's birth was very sudden and she arrived very quickly, with Princess Anne once recalling: "The baby made a rather sudden and positive arrival."

It was down to this sudden arrival that she explained that her older brother suggested the name Zara, which is a Greek name meaning as bright as the dawn.

Despite being a granddaughter of the Queen and 21st in line to the throne, mum-of-three Zara, a former world champion equestrian, does not have a royal title.

She and husband Mike and their kids Mia, Lena, and Lucas live, a low-key life in Gloucestershire.

Charles is said to have inspired Zara's name
(

Last month, the family of five were spotted to at the Burnham Market International Horse Trials in Norfolk where Zara, was competing.

The couple's older children Mia and Lena have been snapped supporting their mum at similar equestrian events in the past.

Zara with her husband Mike Tindall
(

However, it's the first time that royal fans have had a proper glimpse of their one-year-old son Lucas, who was snapped smiling at mum Zara and playing in the grass with dad Mike.

Mike revealed the news of Lucas' birth last year on his podcast "The Good, The Bad and The Rugby" hailing his wife as a "warrior" after the boy arrived at the family home.

He said: "Fortunately Zara's friend Dolly is… actually more important than I am at making sure she's been at all three of my children's births, she was there and recognised that we wouldn't have got to the hospital in time, so it was run into the gym, get a mat, get into the bathroom, towels down, brace brace brace!"

He was baptised in an unprecedented double royal christening alongside Princess Eugenie's young son August.

The ceremony, which took place at All Saints Chapel in Windsor Great Park, was attended by various members of the Royal Family, including the Queen.