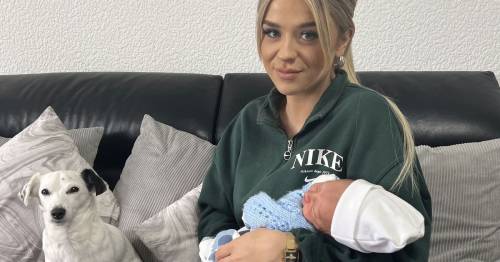 A first-time mum went into early labour after a giant rat emerged from her new sofa.

Tori Wedgewood was expecting her baby early next month but began feeling "period-like pains" amid the chaos before rushing to the hospital.

The 25-year-old had heard a strange noise and pet dog Molly started going "berserk" as she tried to investigate.

Partner Carl Maddison, 28, was at work so she'd called over his parents Gavin and Clare, who live nearby, to help.

The Jack Russell Chihuahua cross ripped the sofa and eventually managed to get inside before the rodent emerged and a chase ensued.

Gavin began filming and can be heard encouraging the little dog to catch the rat as Tori screams "oh, my God!"

She sent the footage to window cleaner Carl who rushed home.

After Molly had killed the rat, the couple destroyed their £3,000 three-piece suite with knives out of fear there were more unwanted occupants hiding inside.

Tori, from Spennymoor, County Durham, said: "I was recording [Gavin] for a laugh. I screamed at the top of my voice when I saw the rat run over the dog.

Molly chased the rat through the house
(

The rodent had been hiding inside the sofa
(

"I was terrified. As the rat started to run, the dog chased it and tried to bite it and I ran across the room as fast as possible, screaming at the top of my voice. I was so scared.

"The dog was chasing the rat around the living room, she caught it and started to bite it in the corner and Gavin was shouting for a pan to kill it with. It was hilarious at the time but my heart was in my mouth.

"A few hours after this all happened, after all the commotion, running across the floor and screaming, when it'd calmed and we knew there was no more rats after checking the sofas and ripping more to check, I had been getting period-like pains and felt a bit uneasy.

"Then later, when I went to the toilet, I noticed my waters had slightly broke and there were spots of blood. A trip to the hospital confirmed that I was in labour.

"We have the rat to thank for Jude's early arrival," she added.

Jude Oliver was born at Durham Hospital the day after the rat encounter.

Carl explained that the house backs onto a woodland area with a small river just yards from the back garden.

Tori keeps the conservatory door open while she's in.

"They sent me the video and I was in hysterics and came home straight away," he said.

Tori added: "I was absolutely terrified and I felt sick. I hate the thought of rats and I've never seen one before so I was terrified."

However, she said she's proud of Molly, nine, who now appears to have a taste for rat catching.

"She's actively looking around the garden to see if she can find more," Tori said.

The couple are "gutted" they had to destroy their new furniture but didn't feel comfortable until they'd checked.

They have since disinfected the house.