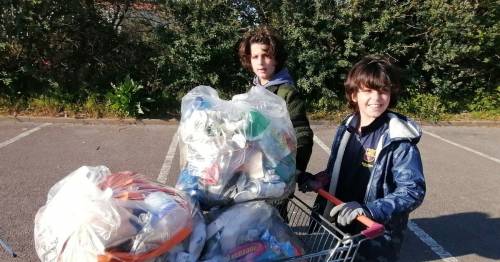 With bin bags and boundless enthusiasm, these little litter pickers are helping hold back the tide of rubbish engulfing Britain.

The country’s parks, beaches and open spaces are being turned into rubbish dumps by mounds of plastic, discarded by mindless fly tippers and litter louts.

Community-minded people such as brothers Danny and Jojo Eisawy are fighting back.

The Mirror hopes the youngsters’ story – and tales from these other selfless volunteers – will inspire readers to continue the crusade against litter.

Football-mad brothers Danny and Jojo Eisawy are kicking trash into touch by picking up after their matches.

The duo started their clean-up crusade in Tonbridge, Kent, after Jojo asked for a grabber for his eighth birthday in January 2019 and pledged to dedicate equal hours to his two passions – footie and the environment.

The boys want to make a change

Mum Charlotte Raveney, 45, said: “We had been involved in a campaign to save a tree from being cut down and it gave Jojo the inspiration to do more.

“They love nothing more than finding a heavily littered area and getting stuck in. It gives you hope for the future.”

The David Attenbrough fans dubbed themselves the Litter Kickers and have become local heroes for their dedication to helping the planet, sharing their hauls of rubbish on their social media accounts.

In February 2020, they created a Leap Day Litter Pick Wave with 125 streets joining in and during lockdown they waged war on discarded face masks, collecting 438 on their outings.

Britain is facing a rubbish crisis

The boys are currently collecting once a day as part of Ramadan and even took litter picking tools on a trip to see their relatives in Egypt.

Their finds have included a bike helmet, a trolley wheel and a dustpan and brush.

Jojo, ten, said: “You get a good feeling when you’ve made a difference and see an area after we’ve cleaned it. I wish people realised the impact their rubbish has.”

Danny, 12, added: “Litter picking is something that takes your mind off the bad things in life.”

With an army of 60 volunteers, Michael Butterworth is passionate about keeping the green green grass of home tidy.

The 45-year-old started collecting rubbish in the Brecon Beacons National Park in November 2009 with friends Pete Bates and Rollo Lewis after they got sick of seeing it on their walks.

He said: “I think it is addictive and something to do with that hunter-gather within the human psyche. It is a wonderful activity that brings people together in a common goal.” 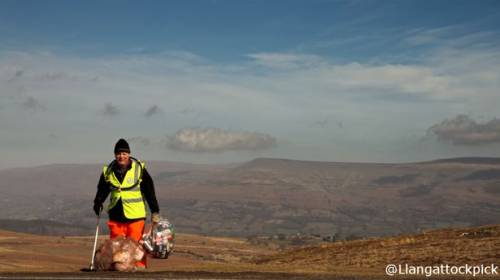 Michael Butterworth collects as much as possible

Llangattock Litter Pickers run ten two-hour sessions a month and recycle as much of what is collected possible.

The group also help to sort out fly tipping sites and recently organised a helicopter to remove 40 tons from a quarry that had been dumped over decades. The haul included a car and 60 tyres.

Michael said: “Around three-quarters of what we collect is drink-related and about 65 per cent can be recycled.

“We are lobbying politicians to see a deposit scheme introduced for bottles – it would not only encourage reuse but reduce littering and increase capacity in public bins.”

The dad-of-three said his crusade has been inspired by his children, particularly his 18-year-old son who has cerebral palsy.

“I want to demonstrate to them that anything is possible and we can make a difference,” he said.

He is planning to turn the group into a charitable organisation to widen its impact and protect the landscape for future generations.

Michael said: “We need to move away from the terms litter and fly tipping, and change our relationship with waste. I like to think of us as ‘miners of lost resources’ instead.”

The IT worker from Worcestershire started picking up litter 20 years ago while walking and says the habit is now a “way of life”, with the council giving him extra recycling bins to store what he collects.

“I do a pick every Saturday and Sunday but if I am out and about, I take my picker and bag with me,” said the 53-year-old.

“I’m a man-Womble hybrid and have developed a superpower litter vision – I can see a discarded chocolate wrapper at 20 paces.

“Like most litter pickers, I’ve had my share of inexplicable finds, like a jar of pasta sauce on top of a bus stop, a complete Subbuteo table and a stack of French pornography magazines.

“If I find something in good condition, like a pair of shoes or an unopened bottle of port, I’ll use it!”

Allister is a member of Duckworth Worcestershire Trust volunteer group but he usually picks solo or with son Josef, 22, and has entertained himself over the years by inventing stories about the rubbish he collects.

In 2012, he turned his tales into a children’s book called Clockwise to Titan, about teenagers using junk to escape a violent youth detention centre, which was published under his pen name Elon Dann.

“People often stop to say thank you or ask what I am doing and I encourage them to give it a go,” he said.

“I think the problem is British people don’t like to stand out or worry they will get hassled, but it is actually very empowering.” 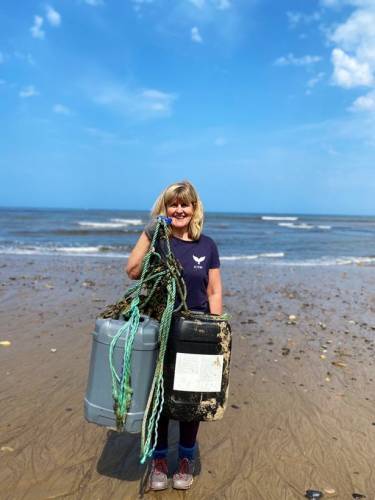 Single mum Jo Moseley credits litter picking with helping her overcome anxiety and believes doing a two minute clean up every day can give everyone the chance to regain control of their lives
(Image: Handout)

Picking up litter on her paddleboard has helped Jo Moseley to overcome her anxiety and regain her purpose in life.

In 2013, the single mum-of-two broke down under the stress of juggling her sons, a busy job, the perimenopause and two parents having treatment for cancer.

But she turned things around after taking up exercise to help her sleep, combining it with positive activities like beach cleaning and fundraising.

Jo, 56, said: “I think the pandemic has increased interest in litter picking because we have become more aware of our immediate surroundings than before and are seeing new things like discarded masks and gloves.

“But also, it gives you the chance to take back some control at a time when there is very little. You can’t change the world but you can change the bit around you.

“The community aspect of litter picking and being part of a bigger movement is also very appealing.”

Two years ago, Jo became the first woman to stand up paddleboard coast-to-coast, travelling 162 miles along canals from Liverpool to Goole over 11 days and collecting plastic pollution on the way.

Her trip raised money for the litter picking initiative 2Minute Foundation, for which she is an ambassador, and was the subject of a documentary film called Brave Enough.

She said: “I pulled all sorts out of the water – footballs, trolleys, vapes, lots of energy drink bottles and crisp packets. One of the packets was from 1995 and older than my kids.

“I do my two-minute litter pick every day and it becomes part of who you are.”

How you can help

Surfers Against Sewage hopes to inspire 100,000 people to clean up a beach, river, street or green space.

With the aim of clearing a million miles, the initiative will run throughout 2021.

The first week of action from May 15 to 23, and “clean leaders” can register at beachcleans.org.uk