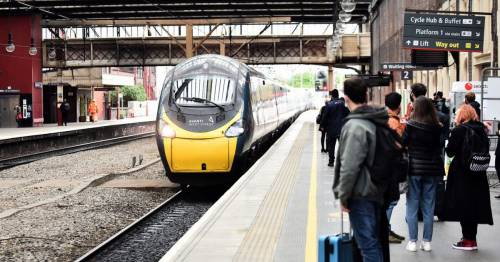 HS2 was meant to be a brand new Y-shaped line first going from London to Birmingham and then branching west to Manchester and east to Leeds.

The government's Integrated Rail Plan which was published on Thursday, November 18, set out plans to axe the planned East branch from east Midlands to Leed, with HS2 trains running on existing upgraded routes instead.

This means that while the West leg is still on, the trains will now run only till East Midlands Parkway near Nottingham on the East.

The HS2 is not the only high-speed railway line that has had routes slashed, with the Northern Powerhouse Rail which was designed as a dedicated east-west line from Liverpool to Manchester and Leeds also facing similar cuts.

But even after scrapping parts, what's left of the projects is not likely not happen until over 20 years from now, in the mid-2040s.

The government U-turn regarding these rail projects have angered many especially since several people to sell their homes to make way for the line which has been axed, despite the PM describing the changes as "a fantastic and a monumental achievement and a great day for rail in this country."

When will the HS2 be completed and why was it delayed?

The HS2 is not likely to be completed for another two decades or more despite being stripped back. Though ministers have claimed that the upgrades would come into service quicker than HS2 and NPR would have done, finer print reveal that it won't finished until the "early to mid 2040s."

HS2 from London to Birmingham, West Midlands and Crewe is expected to be completed by 2035 with the eastern section of HS2 to East Midlands Parkway, will take at least five more years to completed.

The plans for the NPR was first announced in 2019, with the PM confirming development of "the eastern leg as well as the whole of the HS2," earlier this year in February. But, none of the plans have gone ahead due to the high costs involved in both the projects.

Why has the government cut part of the HS2?

The long-planned project was heavily slashed after fears they would cost up to £185bn. After being cut down they’ll cost £96bn, with about £42bn going towards building the first phases of the HS2 from London to Birmingham and Crewe.

Ministers have insisted that these money-saving changes would bring faster train journeys to more communities up to 10 years earlier than planned.

But, Ben Houchen, the Tees Valley mayor has said that without its eastern leg, the whole HS2 project was "a waste of money and should be scrapped."

Previous : Hero postman save elderly woman’s life by dragging her from burning home
Next : SocGen expects ’emergency’ Turkish rate hike as soon as next month