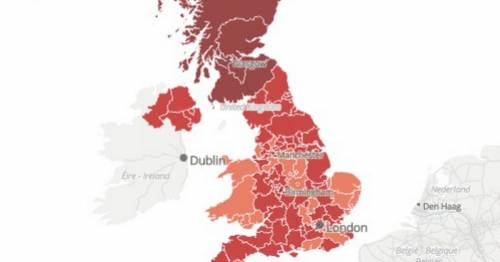 A worrying interactive map has been released which shows the Covid red zones where cases are surging in Britain amid a new wave of the virus.

Cases were up 43% in England last week with the fresh uptick expected to last until late summer or early autumn.

Data in the weekly Office for National Statistics (ONS) survey suggests 1.4million people were infected on any given day in the seven days up to June 10.

That's the equivalent of one in 50 – the biggest weekly climb since the end of December last year when Omicron wreaked havoc over New Year's celebrations.

Wales and Northern Ireland saw one in 45 and Scotland one in 30 during the same period.

The resurgence appears to be being driven by the BA.4 and BA.5 subvariants of Omicron, believed to be more transmissible than BA.2, which is the current dominant strain in the UK.

Use the map here:

An expert told the Mirror this week the bank holiday Platinum Jubilee celebrations may have contributed to the current rise.

Though he said it is too early to tell if we would see a corresponding increase in hospitalisations.

The ONS survey is now the main official surveillance programme used by the Government to track the virus in post-pandemic.

The interactive map shows most of Scotland is in the darkest red, with an average infection rate of 3.4-3.6% – with the nationwide equivalent at 2% or one in 30.

Meanwhile, the percentage of people testing positive across all ages in England, except for the North East, increased last week.

The South East saw the highest rates, with 2.4% estimated to be infected at some stage.

In the West Midlands, South West and London, it was 2.2%.

Commuters, some wearing face coverings due to Covid-19, exit an Overground train in London
(

The prevalence of BA.4 and BA.5 is roughly doubling every week, according to data from the Sanger Institute.

UKHSA director Dr Mary Ramsay said: “After a period of low case rates, we are now seeing increases in outbreaks within care homes and in hospitalisations among those aged 80 years and over.

“As we enter summer, it’s still important to remember that Covid-19 has not gone away and to get vaccinated to reduce the risk of becoming seriously ill with the virus.

"If you’re not yet up-to-date with your jabs please come forward now – it is not too late to get protected."

He told the Mirror on Wednesday: "The way it [Covid] is going to continue to evolve is increasing transmissibility.

"Previously there’s been a lot of chatter about increased transmissibility meaning it’s less lethal. That’s absolutely not true. The lethality thing is something that could go either way.

"It could get less lethal, but it’s certainly not a guarantee."

However, he said it's unlikely there will be another lockdown unless there was a "jump in the biology of the virus" and it became more resistant to immunity or more aggressive in creating disease.

"There will be more infections, I would expect that there would be waves of people being unwell, sort of mass sickness," he said, describing a worst case scenario.

"And there maybe an increase in people ending up in hospital."

He went on to say: "Not all hospital admissions are the same and that needs to be remembered."

He said even in the worse case scenario with Omicron, unless it drastically changes, mass sickness will cause problems for hospitals "but they are not unsolvable problems, they can deal with them".

"The problem comes when you start filling intensive care," he added.

Dr Clarke said, it is "entirely possible" the latest wave could continue to increase through the summer, though if the weather is good and people spend more time outdoors "that should mitigate some of the effects".

Previous : Logan Paul believes rival KSI saved his career with heated boxing feud
Next : Funfair guests stuck 130ft in air as ride breaks down leaving them ‘white as a sheet’