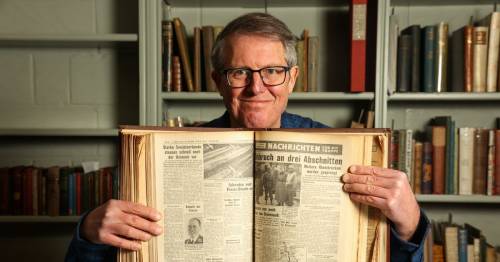 A rare collection of bogus German newspapers designed to demoralise Nazi soldiers is up for sale.

The early examples of “fake news”, called Nachrichten fur die Truppe or News for the Troops, appear to be a genuine German daily.

They were published by the Allied Psychological Warfare Division to be dropped in war zones and contained propaganda to unsettle Third Reich soldiers.

They contained fake reports about German failures and how senior officers were corrupt, avoided military service, lived in luxury hotels and had sexually transmitted diseases from prostitutes.

The papers contained genuine news, sports and society reports but were mixed with tales of how troops’ wives and children were struggling at home with poor rations.

The bogus newspapers even had a Page 3 girl
(

The paper was put together in pre-fabricated huts in Bedfordshire under the supervision of Harold Keeble, later the features editor of the Daily Mirror.

More than a million copies a day were dumped on German troops by the allied forces – more than 160 million in total.

The paper was the inspiration of Sefton Delmer, a British journalist who was the first Briton to interview Hitler.

Dominic Winter Auctioneers are now selling an almost-complete collection of 312 of the original 374 issues.

Editor Arthur Christiansen at work in the Daily Express newspaper offices in Fleet Street, London, in 1949
(

The listing says: “This is a printer’s bound file copy of ‘News for the Troops’, a daily Allied propaganda newspaper produced by the Psychological Warfare Division of the Supreme Headquarters, Allied Expeditionary Force.

“It was an Anglo-American venture and the inspiration of Sefton Delmer who superintended the editorial content, wrote much of the material and inspired the staff.

“After trials and experiments begun in March 1944 the first edition appeared on 25 April 1944 with issue 9, as here, there deliberately being no issues numbered 1-8.

“The paper brought updated news of the war to the German troops, and for added interest and appeal it also featured sports results and pin ups.

“It was printed at the Luton News (Home Counties Group) then packed in large containers and dropped by Allied bombers on or behind the German Western Front.

Nachrichten contained a mix of factual news – such as Allied successes, bomb damage reports and pictures of damaged German towns.

But it was mixed with subversive propaganda and fabricated gossip about the Nazi leadership.

Delmer was born and brought up in Berlin as a British subject, as a son of Australian parents living in Germany.

He spoke fluent German and the newspaper was so successful that he was named in the Nazis’ Black Book for immediate arrest after their planned invasion of Britain.

‘Nachrichten fur die Truppe’ was put together by a team of British and American journalists.

Every night the group compiled the paper together from the news and talks of the radio programme ‘Soldatensender’, which they sub-edited and rewrote for print.

Previous : GM challenges Carvana with CarBravo online used car marketplace
Next : Children don’t recognise mum after she has 40 tattoos covered up for experiment