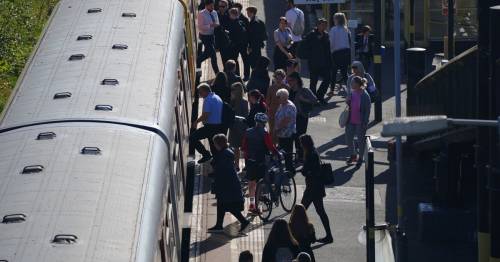 Workers should not expect inflation-busting pay rises, a Treasury minister has warned as unions prepare for the biggest rail strike in a generation.

Simon Clarke claimed offering double digit pay hikes would "bake in a repeat of the 1970s" and said it would not be "sustainable" to raise wages in line with spiralling inflation.

The warning of a real terms pay cut for workers comes as Brits face a week of travel chaos with strikes at Network Rail and 13 train operators on Tuesday, Thursday Saturday, and on London Underground tomorrow.

And teachers and nurses could be the next to stage walkouts amid mounting fears over the impact of the cost of living crisis.

Mr Clarke said the rail strike was "likely" to go ahead but ministers won't get round the table to resolve the dispute over pay and redundancy.

Asked if the Government should be part of the talks, Mr Clarke told the Today programme: "Ultimately, it will only confuse things if we add a third party to these negotiations.

"The train operating companies and Network Rail are working to deliver a sensible programme of reform and a sensible and fair pay deal with the trade unions."

The Chief Secretary to the Treasury said public sector wages would not increase in line with inflation, which is expected to spiral to 11% in the autumn.

The Bank of England made the forecast last week as it hiked interest rates to 1.25% – the fifth successive rise.

"In the current landscape of inflation at 9%, bordering on 10%, it is not a sustainable expectation that inflation can be matched in pay offers," Mr Clarke said.

"That is not something that is going to be seen across frankly the private sector as well as the public sector.

"We cannot get into a world where we are chasing inflation expectations in that way because that is the surest way I can think of to bake in a repeat of the 1970s, which this Government is determined to prevent."

The top Tory was pressed on why No10 had said Bank of England Governor Andrew Bailey's plea for wage restraint was not the Government's position earlier this year.

He replied: "What a spokesperson has said is for them. I'm clear that the reality is that we are trying to manage the inflation difficulties that this economy and indeed the wider West is facing."

Asked if public sector workers should not expect a pay rise in line with inflation, he said: "Correct."

He apologised for the "misery" the rail strike will cause commuters and denied that the Government is actively looking for a fight with unions.

"We absolutely don't want them to go ahead, I recognise this is going to cause misery for millions of people and I am profoundly sorry about that," he told BBC Breakfast.

"No-one is suggesting there's some kind of pay freeze required here, we all want to see a sensible pay increase.

"Linked to that we need to see reform of some of the practices that make our railway a very unsustainable entity at the moment.

Downing Street has urged businesses to "take heed" of soaring inflation and to consider pay restraint.

The Prime Minister's official spokesman said: "The Government wants a high wage, high growth economy and it's not down to governments to dictate to private companies what wages they set. Everyone has different circumstances, so a top-down approach is not our position.

"But, clearly, the Government is taking heed of the economic situation in which we find ourselves and we expect private-sector companies will do so as well.

"There is a global challenge we are seeing, particularly around inflation at the moment, and we need as a country to avoid doing anything that would stoke inflationary pressures further.

"I'm not necessarily saying it would be around pay but there are a number of factors that could stoke inflation that people need to be mindful of."

Previous : Long Covid IS a disability, tribunal rules in landmark discrimination case
Next : No10 confirms it intervened over ‘untrue’ claim Johnson tried to hire Carrie for Foreign Office job